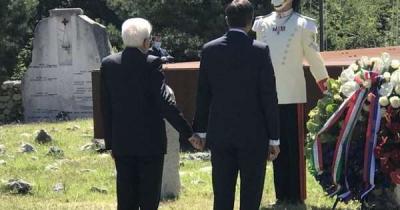 TRIESTE – In a historic meeting, the Italian President, Sergio Mattarella, and his Slovenian counterpart, Borut Pahor, met at the Opicina barracks to observe a minute of silence and commemorate at the Basovizza foiba the massacres of ethnic Italians by Yugoslav partisans that occurred after World War II. Pahor’s presence marked the first time that the highest representative of a nation from the ex Yugoslavia had been present.

The two presidents met on Monday, hand in hand, to remember those who had died in 1945, when the Yugoslav partisans threw 2,000people into sinkholes. The foiba is located on the Karst plateau near a disused mining well about 200 M deep and since 1980 it has been classified as a monument of national interest, reports La Repubblica.

"Today here in Trieste with the presence of our friend President Borut Pahor we mark an important step in the dialogue between the cultures,” said Mattarella. “History cannot be erased. We can cultivate it with grudge, or make it a common heritage in memory,” he said.

"Today, as someone said, we live those forbidden dreams that come true, as if after a hundred years all the stars had aligned. But they didn't do it alone, we did it,” said President Pahor, as quoted from Il Messaggero,

Following their words, the two leaders laid another wreath at the Monument of the Four Martyrs.