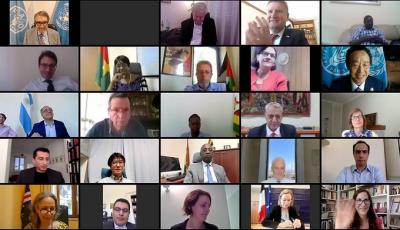 ROME – Western diplomats tried to no avail at a Council meeting last week of the Food and Agriculture Organization (FAO) to present a uniform position on organic reform of the UN agency introduced unilaterally by the autocratic Chinese director general Qu Dongyu, UN sources say.

“Many EU and Western countries are fearful of the autocratic management style of the FAO DG and realize that virtual meetings prompted by lockdown give unchecked, absolute powers to the DG,” one veteran FAO watcher said.

As the Deputy Director General Laurent Thomas announced months ago to a baffled audience of diplomats accredited to the FAO, Dr Qu has implemented organic changes since the start of the year without approval from the agency’s Council which groups representatives of donor members. “The Covid 19 pandemic allowed a Chinese management style to be imported smoothly into this large UN organization,” the observer added, “developing countries massively supported Dr Qu and outvoted Western countries at the Council.”

The new organic structure and rebranding by Dr Qu of existing units as a ‘new leadership group’ at FAO is “unnecessary, may cause havoc and is mostly window dressing,” a senior Western diplomat told the Insider. “Such headquarters games will cause delay and reduction in delivery of programmes and activities as with many past reforms, without making FAO more effective.”

“They will make the possibility of reaching SDGs in 2030 even more remote,” he added.

A proposal at the Council to have the organic reform, to make the FAO more "agile," reviewed by an UN inspection body, was defeated.

Meanwhile speculation that EU ambassadors to the FAO, from Hungary and the Netherlands, could be running for the influential post of independent chairman of council, to replace powerful Pakistani kingpin Khalid Mehboob, could also lead to Latin American countries fielding a candidate, the sources said.

In another development many diplomats have been approached by FAO staff members from their countries fearing for their jobs after an announcement last May to staff and staff representatives that over 57 posts would be abolished. The new HR director Geert de Leeuw evidently has no decision making functions is relegated to a merely token role, FAO insiders say.

Ms de Leeuw has affirmed that nobody will be sacked and those who are axed will be re-deployed to vacant positions, but staff and their representatives are doubtful.

There is skepticism about Dr Qu’s claims to have turned the page on the aggressive policies of the former DG, José Graziano da Silva, who undertook widespread bloodletting of staff in what he considered to be a crackdown on excessive staff privileges for a humanitarian organization.

Despite harmonious public pronouncements, many of the senior staff responsible for implementing Graziano’s policies slashing staff levels and family benefits remain in direct full command of personnel management. There is speculation that FAO may emulate WFP and see a cycle of short-lived HR directors.

Discontent has been fuelled further by Dr Qu ordering the payment of a pay off bonus worth six months’ salary to ADGS and other sacked senior staff over and above the normal end of service emoluments, the sources say.

Other sacked staff lower down the FAO food chain would like to apply for the bonus but it is not known if the Finance Committee will clear the initative.

Against this background, senior staff seem too often more concerned with grabbing the limelight rather than achieving results.

“There has been a soft but nonetheless effective Hong-Kong like crackdown on FAO staff and diplomats from developing countries” who fear pressure on their governments or even being declared persona non grata at FAO if they do not voice enthusiastic vocal support for Dr Qu’s initiatives,” a senior Western diplomat said.