'Scarlet Pimpernel' lives up to his reputation for evasion 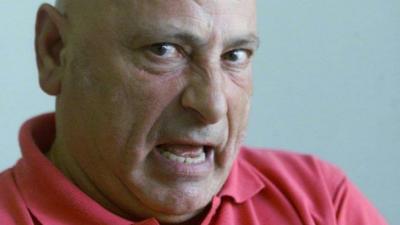 Sardinia's best known bandit pulled off the eleventh successful escape of a long criminal career last week when he slipped quietly away from his home in the mountain town of Orgosolo as the supreme court prepared to confirm a 30-year prison sentence for international drug trafficking.

Aged 78, Graziano Mesina has spent half his life in prison and much of the rest of it on the run from justice. His early life turned him into a crime legend, as he clocked up convictions for murder and kidnapping and became known as Sardinia's "Scarlet Pimpernel" for the ease with which he managed to escape from prison.

Surveillance cameras covering his street were vandalised twice in the week leading up to his disappearance. Released on bail last year, he had been ordered to live in his home town in the mountains south of Nuoro and to report to the local carabinieri station every afternoon.

In 2004 it appeared that Mesina, known affectionately as "Grazianeddu", had decided to turn his back on crime. Pardoned by the president, Carlo Azeglio Ciampi, he became a tourist guide in the mountains notorious for bandity, kidnaps and blood feuds and a tourist attraction in his own right. Balding and pot-bellied, he was a far cry from the glamorous rogue who had fascinated the media, attracted swarms of female admirers and eventually became the protagonist of around 40 criminology theses.

Things began to unravel for the newly respectable Grazianeddu, who used to sit next to the mayor at the town festival, when police intercepted his voice in the course of an investigation into drug trafficking in 2008. Extortion, death threats and kidnap plots emerged from behind the supposedly retired criminal's coded language, according to investigators.

In 2013 he received his first conviction for the new crimes, commenting that the 30-year penalty amounted to a death sentence for him - an indication, perhaps, that he didn't intend to return behind bars.

The ninth of 10 children of a shepherd from Orgosolo, he had his first brush with the law when he was arrested at the age of 14 for possession of a stolen rifle. Things escalated five years later. He was sentenced to 16 years imprisonment for shooting and wounding a man suspected by his family of falsely implicating three of his brothers in a kidnap that ended in murder.

His criminal kudos grew as a result of his success in breaking out of custody, twice by jumping from a moving train, once by escaping from hospital in Nuoro and hiding for three days in a drain, and once by scaling a seven metre wall and taking off into the countryside in a taxi.

On that last occasion he was accompanied by a Spanish former member of the French Foreign Legion, Miguel Atienza, with whom he went on an 18-month crime spree. Together they kidnapped six wealthy individuals and held them for ransom, their luck running out in 1967 when Atienza was killed in a shootout with police, in which two officers also died.

Mesina's fame as an honourable gangster was bolstered by his decision to release a child, captured together with his father. Mesina gave the child, Marcellino Petretto, a 1,000 lire note and told him: "Buy some sweets and go home. I don't take children."

In 1992 Mesina took advantage of a period of furlough from prison to help negotiate the release of Farouk Kassam, 7, the child of a wealthy Sardinian hotel owner of Belgian/Indian origin. The affair remained shrouded in mystery, with police denying a ransom had been paid and that Mesina had made a positive contribution. The child was released after six months in captivity and after his kidnappers cut off part of an ear to pressure his family.

Police have been searching for the missing criminal, with efforts concentrated in the rugged terrain around Orgosolo but also said to be widening to include the possibility that he had fled to Corsica or Tunisia.

At 78 life on the run may be more stressful than it was in his criminal heyday. As a guest of the Milan underworld he used to accompany the crime boss Francis Turatello when he robbed illegal gambling dens in the city. Grazianeddu would carry an umbrella, his machine gun concealed inside.