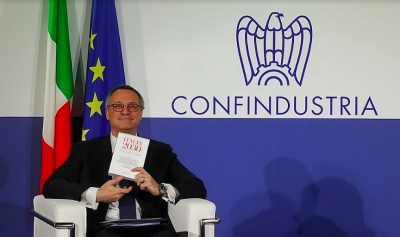 ROME – Carlo Bonomi, President of the General Confederation of Italian Industry (Confindustria), expressed his disappointment with Italian Prime Minister Giuseppe Conte’s State General summit held at the Villa Pamphili, in what was his first virtual meeting with foreign press since becoming Confindustria president.

During the press conference on June 13, Bonomi criticized Conte’s lack of plans for Italy’s ‘restart’ post-Covid-19 lockdown, and said he expected a detailed plan with a timescale and the expected effects on GDP, however “none was in sight.”

Bonomi took the opportunity to present his own ‘Italy 2030’ industrial plan, stating: "We believe in it, we do not give up, and we will strive for the country to express its best as, in spite of the shortage of raw materials, it has the potential to be a great transformative country; the second exporter after Germany”

According to his estimates, the damage caused by the pandemic can be calculated at 180 billion euros, 110 billion euors of which will be in the tourism sector, an industry that has been heavily affected. To account for this, “we need to be able to create relationships between institutions and social partners such that allowed Germany - after 21 hours of discussion –  to set up a package of 120 billion euros to revive the economy."

Bonomi also mentioned the unresolved employment and management situations of Alitalia and Ilva, before mentioning the crisis in the automotive supply chain sector, with heavy delays caused by intrusive bureaucracy and Italy’s difficulties in developing digital capabilities that have placed it behind other western countries.

As evidenced by the recent DESI 2020 report published by European Commission, Bonomi commented that broadband will never be used if it requires approximately 5000 authorizations just to build it and maintain it.

Bonomi continued by stating that he was concerned about the potential economic situation once the emergency regulations expire.

As for public spending and the debt crisis, Bonomi welcomed it if it made for productive investments, however, if it was only for current expenditures, Confidustria would not be able to support it.