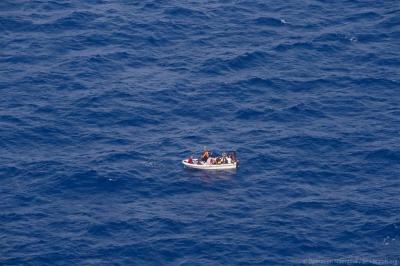 PORTO EMPEDOCLE – Between June 17 and June 18, 211 migrants were rescued by Sea Watch 3, and have since been quarantined on the Moby Zazà, a ferry hired by the Italian government as an anti-Covid procedure, as on Saturday the health authorities and the police boarded the the vessel after "a symptomatic case had been identified at the time of the boarding", said Giorgia Linardi, spokesperson for the NGO Sea Watch. The test result came back negative on Sunday.

With ‘Sea Watch 3’ in Porto Empedocle, and the ‘Ionian Sea’ vessel in Pozzallo, having rescued 67 migrants on Saturday evening 48 miles from Lampedusa, there are currently no humanitarian ships watching Libyan waters, reports La Stampa. Another shipwreck of migrants occurred on Saturday morning off Tripoli, Libya, and it is not known how many have died, reports Sea Watch.

Since Sunday, NGO ships have in total brought 278 migrants to Sicily, recovering three inflatable boats, two in Libyan waters and one in Maltese rescue ones.

The SOS Mediterranee's ‘Ocean Viking’ leaves Marseille on Monday morning after months in port, reports La Stampa. The Mediterranean has become a dark space for information during the coronavirus crisis, which has also seen the disappearance of the ‘Nuova Iside’ fishing vessel, with the wreck recently found at a depth of 1400 meters, reports La Stampa.

So far, from Jan. until the end of June, 5,832 migrants have arrived in Italy via the Mediterranean, compared to 2,242 throughout 2019, reported in Il Giornale.

The month of May 2020 saw double the crossings as May 2019, which doesn’t account for all those who failed to make the crossing.