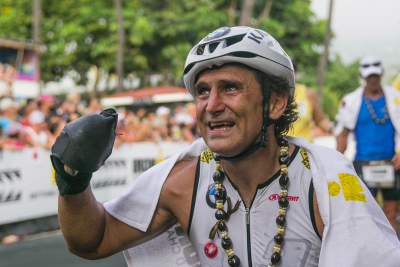 SIENA – Alex Zanardi, the Italian paralympic champion and ex professional race car driver, has spent a third night in hospital in a medically induced coma after a devastating accident in Pienza for which he required neurosurgery, reports Il Fatto Quotidiano. An investigation into the collision is underway, and disconfirms the hypothesis that Zanardi had been on his phone at the time of the accident. Zanardi’s helmet is said to have slipped off in the collision, and he beat his head violently against the metal over the mudguard and then the asphalt, reports Il Messaggero.

On Friday, Zanardi, 53, crashed into a truck while he was racing at the Obiettivo Tricolore relay, and was helicoptered to Sienese university hospital, where his “neurological condition remains serious," according to the hospital bulletin as quoted in Il Sole 24 Ore.

The truck driver is one Marco Ciacci, 44, and he was driving slowly and in his lane at the time. Carabinieri investigators, led by Major Roberto Vergato, aim to shed light as to why Zanardi lost control, reports Il Fatto Quotidiano.

In an interview with Corriere Della Sera, journalist Maestrini recounted that the racers were preceded by a local police car, but that this was not enough to prevent a collision with the oncoming vehicle, after which the bike overturned on the left side and Maestrini heard Zanardi screaming in pain.

Zanardi briefly competed in Formula One, claiming two championships for IndyCar and NASCAR team owner Chip Ganassi, and also had 15 victories in the Championship Auto Racing Teams (CART) series. Zanardi lost both his legs in a crash in 2001 while competing at the EuroSpeedway Lausitz in Germany, reports autoweekly.

The Italian Prime Minister, Giuseppe Conte, tweeted in support: “you never gave up and with your extraordinary strength of mind you have overcome a thousand difficulties. Come on Alex Zanardi, do not give up.”