All Rise for the Prosecution of Montanelli 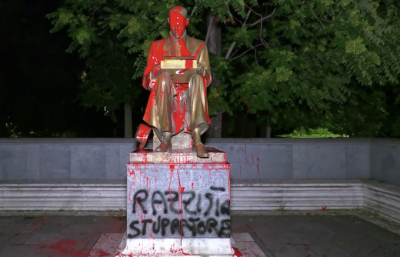 MILAN - In the garden of via Palestro, the statue of the famous Italian journalist, Indro Montanelli, sits on a pile of newspapers with a typewriter on his lap. On the evening of June 13, approximately four cans of red paint were dunked on the statue's head, and the words “Racist, Rapist” appeared in black spray on the pedestal.

Indro Montanelli was one of Italy’s most celebrated journalists. He is remembered as a brilliant writer, an independent thinker, and a fierce defender of free speech. He founded Il Giornale in 1973, and even after Silvio Berlusconi became the majority shareholder of the paper in 1977, that did not stop him from saying of Berlusconi that: “He lies as he breathes.”

History might have vindicated Montanelli’s assessment of Berlusconi, but it has not been kind to Montanelli. On June 10, the anti-fascist ‘The Sentinelli Association’ asked for Montanelli’s statue to be removed in a letter addressed to the Milan mayor, Giuseppe Sala. In public, Montanelli was a long-time supporter of fascism. However, the brunt of the arguments against his statue center on his private life. While serving in Mussolini’s army during the invasion of Abyssinia in 1936, Montanelli bought a 12-year-old girl to be his wife, and paid for her with 350 lire, a horse, and a gun.

In 1969, from the audience of a television program, journalist Elvira Banotti questioned Montanelli about his child wife. Banotti asked whether Montanelli understood that, “intercourse with a 12 year old is intercourse with a 12 year old; if you did this in Europe you would consider this raping a girl, right?” Montanelli responds yes – he does and he would – but it was not about what was right in Europe, because in Africa, “they do get married at 12.”

The demands of a social movement should not be blindly followed any more than they should be reflexively rejected. A fair hearing, in other words, is required for Montanelli. I shall act as prosecutor, given the sheer number of Italian politicians and scores of Italian journalists clamouring to speak in his defence.

In a Facebook video addressing the demands to remove the statue, Mayor Sala explained that he had seen the video of Montanelli, and confessed his personal “disorientation” at the way Montanelli had spoken. However, Sala rejected the Sentinelli Association’s request. “Montanelli was more,” Sala said. “He was a great journalist who fought above all for freedom of the press, an independent journalist, and perhaps for all these reasons he was kneecapped.”

The kneecapping Sala refers to happened in 1977, when Montanelli was shot four times in the legs by two men of the Italian Red Brigades. Why, though, is this relevant? While it’s conceivable Sala thinks that to remove the statue would be to condone kneecapping, it seems more likely that Sala aims to move the conversation away from the grounds on which the statue's fate should really be decided – the actions and character of Montanelli himself.

A generous reading of Sala’s statement would be that he used this red herring to assuage his own discomfort; but not all defences of Montanelli allow for a such generous readings.

Take, for example, the always edifying Matteo Salvini, who tweeted: "Hands off Montanelli! What a disgrace the Left, long live freedom.” If arguments from emotion are to be allowed in the courtroom, then let me stress with an exclamation mark that when the girl in question was 12, Montanelli was 25! Or – and what a disgrace – the fact that Montanelli frequently spoke of his pre-teen wife as “a small docile animal.”

To this objection, the Corriere della Serra journalist, Beppe Severgnini, has an answer: “If an isolated episode were enough to disqualify a life, not a single statue would remain standing.” In sum, one should take Montanelli’s life in its totality and moreoever recognise that vigilante mob justice tends to spillover.

A cogent point – if only progressives were as interested in conversations as they were at gesticulating over statues. However, Severgnini’s argument as it pertains to Montanelli makes two errors. First, he conjures up a slippery slope fallacy (to start with Montanelli must mean we cannot end with Montanelli), and second, he implies that when we talk about marrying a 12 year old, we are talking about an isolated event, and not about every day after the event, the days that Montanelli remained married to a child.

So it falls on Montanelli’s prodigy, Marco Travaglio, current editor-in-chief of Il Fatto Quotidiano, to erect a defence of Montanelli. Travaglio signed off on this: “He was the son of his time, not a racist.”

This stipulates that we cannot possibly judge Montanelli decades after the fact. This defence has potential. When it comes to statues, time should be considered as a potential mitigating factor, as there are numerous historical figures to which societies owe enormous debts, but whose private lives darken their features and complicate their remembrance.

This defence might save others, but it does not save Montanelli.

Montanelli died in 2001. He was young enough to have known better. In 1969, when Montanelli said, “Sorry, but in Africa, it’s another thing,” Elvira Banotti rightly pointed out that a girl in Africa or a girl in Europe was a girl no matter; but when someone points out that Montanelli was not only in another place but had been born in another time, they should be reminded that when Montanelli’s wife was 12, the legal age of consent in Italy was 14.

Even by the standards of the day, therefore, Montanelli’s statue should be torn down. In this online clip from Montanelli’s interview, Montanelli can be seen smiling as he discusses his actions, seeming to relish in the emotion of the topic. His mannerisms seem to suggest a certain pride. He had plundered from Africa as a colonialist, and now got to enjoy his position in Italian society as the cool contrarian.

Montanelli didn't express any regret. Instead, he planted his flag in the shifting sands of cultural relativism. Society allowed this of him back then; perhaps even encouraged him. His was more a failure of civilisation than it was a human one. Montanelli didn’t correct his record. Italy should correct theirs, if only by removing this one skeletal statue.

And on the pedestal these words appear: "Razzista, Stupratore". We should hope that soon, nothing besides remains.