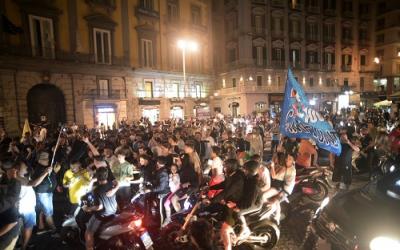 NAPLES – A World Health Organisation (WHO) representative spoke out against the thousands of people on the street of the Campania capital during the coronavirus crisis, as they celebrated the Azzurri victory over Juventus to claim the Italian Cup, with the pictures shown on Italian television. Ranieri Guerra, deputy director of the WHO, said in a radio interview that “at this moment we cannot afford it, luckily it happened in Naples, where the governor and mayor have implemented rigid measures and the incidence of the virus is lower than elsewhere,” as quoted from Il Messaggero.

“I am happy for Gattuso and for Naples but something did not work,” commented the leader of the League and ex Minister of the Interior, Matteo Salvini, as quoted in Il Messaggero.

The mayor of Naples, Luigi De Magistris, said that on “Wednesday evening the contagion of happiness won,” in the aftermath of the celebrations in which people were filmed embracing each other in tightly packed streets.

Italian journalist and director of the La7 news, Enrico Mentana, responded to the comments of the WHO assistant director and the mayor of Naples, by taking the side of those who wanted to celebrate. Although gatherings were risky, Mentana said that he too would have gone out to celebrate if he had been a Napoli fan, and that "football without celebration is a Playstation game," as quoted in Corriere Della Sera.