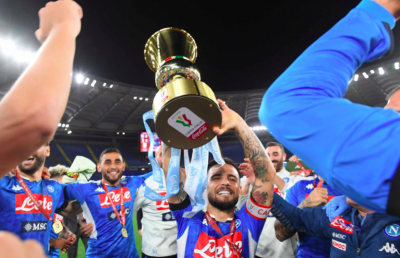 ROME – Napoli earned a first major trophy in six seasons after beating a subdued Juventus 4-2 on penalties in the Coppa Italia final, after a goalless 90 minute tussle in the empty Sadio Olimpico. It was Napoli manager Gennaro Gattuso’s first trophy, and was also the first to be claimed following the coronavirus pandemic. In Naples, there were fireworks and singing in the streets in celebration.

The first half saw two early chances from both teams, with Juventus superstar Ronaldo having a low strike saved, and with Napoli’s Insieme curling a dangerous free kick which hit the woodwork from outside the box. Both sides had spells of sustained pressure, but the half ended goalless.

A cagey second half meant both sides took more long shots in an effort to break the deadlock. The closest effort arrived in extra time through Nikola Maksimović, whose header from a corner was low and hard but saved off the line by Juventus keeper Buffon, then spilled, and then slammed off the woodwork from point blank range from Elif Elmas

After a turgid 90 minutes were up, the Coppa Italia final went straight to penalties, avoiding the usual extra time, eliminated in order to reduce the minutes the teams had to play in view of the extraordinary circumstances, reports Il Post.

Paulo Dybala took Juventus' first, which was saved, before next up Danilo Luiz da Silva blazed his high over the bar, two errors that cost Juventus the match, as Napoli dispatched their penalties and Arkadiusz Milik scored the winning spot-kick.

“It was a well-deserved cup,” said Gioia Meret, the Napoli keeper. “I am proud to be part of this group." Meret also paid tribute to Gianluigi Buffon, the veteran keeper whose performance kept Juventus in the race.

This was the third time the Azzurri have won a final at the Olimpico, after triumphing in 2012 against Juventus, and in 2014 against Fiorentina, reports La Repubblica.