Francis prays for cooperation on Libya as summit collapses 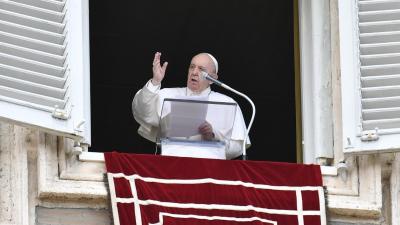 VATICAN CITY – For the Angelus from St Peter’s Square, Pope Francis urged the international community to strive to restore peace in Libya, and said that he hoped a path would be forged towards peace, stability, and unity. “I am following with great concern the dramatic situation in Libya. It has been present in my prayers for the last few days.”

“I invite the international community, please,” reiterated Francis on his Sunday address, “to take their condition to heart, and to identify paths and provide means to ensure the protection they need.”

The Libyan civil war is being fought between the rebel Libyan National Army (LNA), and the Government of National Accord (GNA), but the LNA has retreated over recent weeks to fight in the desert since the taking the capital's airport by the GNA, reports The Libya Observer.

However, the Libyan conflict looks set to continue after an Istanbul summit on Saturday between Turkey and Russia was cancelled without explanation. The summit was meant to provide a pact between the two countries to move towards a resolution for the civil war, but Moscow remained keen to involve the leader of the LNA rebel general Khalifa Haftar, and Ankara wanted to exclude him, report La Repubblica.

The pontiff’s words came days after news that mines had exploded in a Tripoli neighbourhood and had killed seven people and injured 19, reports La Stampa.

"I also pray for the thousands of migrants, refugees, asylum seekers, and internally displaced persons in Libya,” said the pontiff.

Thousands of migrants and displaced people have been made more vulnerable by the COVID-19 crisis.

According to the International Organization for Migration (IOM), a shipwreck occurred off the coast of Libya on Saturday, with 30 migrants on board. Twelve people were declared missing at sea, including two children.