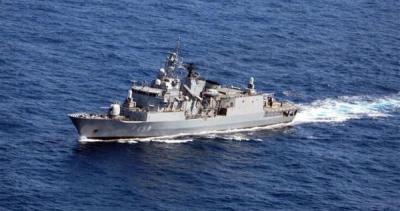 BENGHAZI – A Greek frigate called the ‘Spetsai’, under Italian command, tried to intercept a merchant ship bound for Libya, but a military vessel sent from Ankara intervened as tensions spiked in the Mediterranean on Wednesday, reports La Repubblica.

In the Gulf of Sidra, the cargo ship that had left from Turkey was followed by the Spetsai which then contacted the merchant vessel asking for information on its cargo and its destination, before they received a communication from a Turkish warship that to keep away, before a second Turkish warship started to move towards the Greek ship.

The merchant boat was flying the Tanzanian Cirkin flag when it was intercepted, just north of Benghazi, sailing towards Tripoli, reports mondogreco.

The Spetsai was patrolling as part of Operation Irini, which attempts to control the Mediterranean so as to stop arms trafficking into Libya, but the operation does not provide for an international blockade.

In an unconfirmed version of events, a reconnaissance helicopter is alleged to have taken off from the Spetsai before flying over the merchant ship, according to Greek media outlet Ant1 TV.