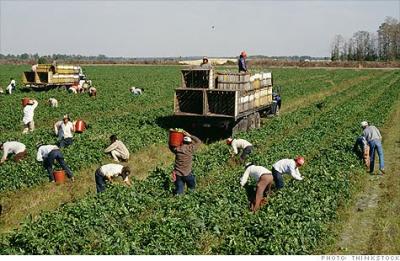 COSENZA – The Guardia di Finanza of Cosenza have arrested 52 people in connection with 14 seized farms where illegally employed foreign workers were subject to mistreatment, 12 of which were in the forrest region of Basilicata, and two of which were in the province of Cosenza, according to judicial sources. An operation on Wednesday morning involving over 300 officers occured after the request of the prosecutor Flavio Serracchiani, on the basis of alleged crimes aimed at worker exploitation and the facilitation of illegal immigration.

Of the 52, 14 have been taken to prison and the 38 others have been placed under house arrest, after the climax of the investigation named ‘Demetra’, which found that marriages were being used to get immigrants' residence permits so that they could work on farms, reports Il Fatto Quotidiano.

As well as two hundred workers who were employed through scam marriages, labourers were also being forced to work on farms in conditions and for payment which represents modern day slavery, reports Gazzetta del Sud.

The provincial commander of the Guardia di Finanza of Cosenza, Colonel Danilo Nastasi, said on local media that “this operation demonstrates an injury to human dignity, with the depersonalization of the laborers, sometimes addressed as if they were apes,” as quoted in Gazzetta del Sud.

The ‘Italia Viva’ Senator, Ernesto Magorno, commented on the operation and stated his thanks to those who had carried out the operation in Calabria, and said “this is a very hard blow. We will continue to work to eradicate this evil."

Among the suspects are several entrepreneurs, and the Guardia di Finanza of Cosenza discovered two criminal organizations that operated both in the Calabrian province at large and in the town of Matera, reports Il Fatto Quotidiano.