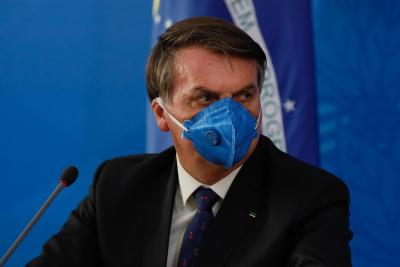 SÃO PAULO – While Europe slowly recovers from the most devastating pandemic of the century, for Brazil recovery is still but a distant concept. Ranking second in number of Covid-19 cases, behind only the US, with about 742,000 people infected and a fast-increasing death toll of 38,000 as of Thursday, Brazil has yet to acknowledge that the danger of the new coronavirus is real.

Scepticism around social distancing, healthcare capacity, and the catastrophic aftermath of a poor emergency response, is the result of an ongoing political crisis that divides Brazilians into two black and white categories that do not allow for shades of grey. As far-right president Jair Bolsonaro continuously ignores WHO recommendations and encourages his supporters to do the same, strict emergency response plans have been labelled as leftist conspiracies and an attempt to overthrow his government.

This polarisation, already deep-rooted in the society, was mostly evident when the first measures to fight Covid-19 were implemented in the country. With limited information about the nature of the virus at that time, Brazilians initially resisted the seriousness of the respiratory problem the infection could cause.

This posture was influenced by the president, who downplayed the pandemic by calling it “a little flu” whose most severe symptoms were reserved for the elderly and the unhealthy. Despite being 65 years old and thus at a higher risk, Bolsonaro also said that if he were infected with the virus, he would not have to worry due to his past as an athlete.

The president’s statements were part of his offensive against lockdown, which was gradually being implemented by governors and mayors throughout the country. The federal government’s persistent attempts to demoralise these measures did not stop different regions from enforcing two months of quarantine. However, they were highly effective in stirring up controversy.

In March, when lockdowns were initially implemented, Brazilians, who are world champions in small talk, suddenly forgot their trademark comments on the weather to express what they thought about the Covid-19 crisis.

It would take just one person to be in the line of the bank, wearing a mask and standing one metre away from others, to be approached by the nearest person with a comment such as, “these are crazy days, I heard China fabricated the virus to control the world.”

Confronting people about their irresponsible behaviour produces the same effect. Anyone who took the initiative of advocate social distancing risked being told “things were not as chaotic as the media led us to believe.”

Criticism against governors and mayors who have closed state and municipal borders and imposed local lockdown then rapidly increased. On the news, there were clashes between the president and state authorities which often made the headlines. This tension reached its peak in April, when a video of a cabinet meeting with Bolsonaro was leaked, which showed Minister of Women, Family and Human Rights, Damares Alves, asking for the arrest of these state and municipal authorities. Earlier in that same month, Bolsonaro had suggested that rigid lockdowns were a political manoeuvre against him, and questioned the veracity of the number of coronavirus cases in certain states.

The president’s attacks were not restricted to the opposition. They have also been extended to members of his own government. The popularity of former Minister of Health, Luiz Henrique Mandetta, as well as his resistance to recommending chloroquine for Covid-19 patients led him to be fired by Bolsonaro and replaced by Nelson Teich.

The latter shocked Brazilians when he announced his resignation less than a month after being appointed. Teich’s announcement is believed to have been motivated by divergences with the president over the usage of chloroquine and other scientific guidelines to fight Covid-19, in addition to the strong influence of the military in the Ministry of Health, which would have bothered the former minister.

The military’s influence escalated when the president appointed Teich’s former Executive Secretary, General Eduardo Pazuello, as Interim Health Minister, and most recently Colonel Élcio Franco Filho as the new Executive Secretary for Health. Pazuello does not have any experience in the healthcare system, while Franco Filho was Secretary of Health in the State of Roraima for a couple of months in 2019 despite not having any healthcare background.

The ascension of the military in Bolsonaro’s government raises a red flag in a country where the far right once again feels comfortable to support a military coup. However, no one can say they did not see that coming. During the voting process to impeach former president Dilma Roussef in 2016, Bolsonaro, who was a member of the Congress, dedicated his vote in favour of the impeachment “to the memory of Colonel Carlos Alberto Brilhante Ustra, the terror of Dilma Roussef.”

Ustra was the head of the secret service in São Paulo (Doi-Codi) during Brazil’s 21-year military dictatorship, and was personally responsible for the disappearance, torture, and death of opponents of the regime. Rousseff, who was part of the leftist guerrilla, was one of the youngsters arrested and tortured at the Doi-Codi. In 2019, in the occasion of a lunch with Ustra’s widower, Bolsonaro said the colonel was a “hero”.

The compliments directed to torturers and other political figures from the military dictatorship are not the only evidence that Bolsonaro flirts with a coup. The increasing number of military officials in his government, his discomfort with the autonomy of other government divisions, and his continuous attempts to demoralise and censor the media, also send a clear message.

On June 3, Bolsonaro was the star of another polemic. The government delayed the release of its daily report on Covid-19 cases from 7:00 p.m. to 10:00 p.m. because of alleged technical problems. On the following days, the report continued to be released at 10:00 p.m. When asked by a journalist what motivated the change, the president mockingly said that Jornal Nacional’s newscast, which is aired at 8:30 p.m., would have its Covid-19 coverage compromised. Jornal Nacional is Brazil’s most renowned TV newscast, against which Bolsonaro has declared war multiple times.

Bolsonaro was quick to correct himself by telling the journalist that the actual reason behind the change was to fix the report’s accuracy by counting the cases until later at the end of the day before having them announced. Yet some congressmen and other political authorities fear that the change favours the manipulation of data and might attempt to compromise the media.

On June 5, Bolsonaro added to these suspicions. The Coronavírus Brasil website, where official Covid-19 data is released, was taken down, allegedly for maintenance, and only returned the next day. However, when the website was back on, there were missing figures. Months of collected data had disappeared, and only numbers from the past 24h were available. Interim Health Minister Pazuello said the changes aimed to improve data analysis, and that another platform is being developed with the same purpose.

Being suspicious is a sentiment Brazilians are familiar with, but in this scenario when it comes to Covid-19 many more struggle to identify what is true and what is a hoax. The uncertainty, alongside the global economic crisis, has caused severe collective anxiety, which the government solely mitigates with a monthly emergency fund of 600 reais (around 107 euros) per eligible person, or 1,200 reais (around 215  euros) for women who are sole family breadwinners.

Charity initiatives and community work in poor neighbourhoods exist, and significant demonstrations against Bolsonaro’s anti-science government are taking place, but many are still caught in the crossfire between the political trenches.

It is first necessary to officially acknowledge that things are bad, before we can hope to come together, and that “andrá tutto bene.”