Hundreds of Italians protest for BLM in Eternal City 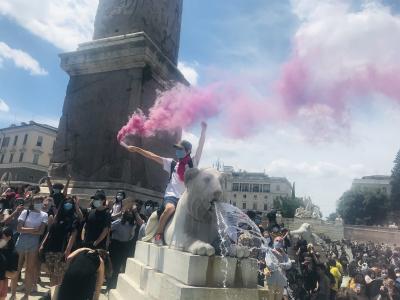 ROME – Hundreds of Italian young people added their voice to the thousands upon thousands protesting the murder of George Floyd and to all those who have lost their lives as a result of police racism and brutality. The death of George Floyd on May. 25 at the hands of police in Minnesota marks a turning point in race relations, and the two hour protest in Rome showed how the young people of Italy are ready to stand in solidarity with all those who have suffered from racism.

In the heart of Piazza del Popolo on Sunday morning, young people chanted as a speaker called on the crowd to, “Say Their Name,” referring to all the people who have lost their lives as a result of police brutality. One of the men whose name was chanted was Phillip White, an unarmed man who was beaten and bitten by police dogs, and who died in New Jersey in 2016.

The event, organised by ‘Women's March Rome’ and ‘Denise Fuja Berhane’, saw hundreds gather to support the voiceless. Many were young and everyone was keen to highlight the fact that racism in one part of the globe is a problem for all people all around the globe, and that the problems that have led to so many deaths in America, are also problems which are  systemic in Italy.

One sign had been written with, “I don’t understand, but still I stand.”

This is a key distinction. No one can pretend to understand what it has been like for the generations who have lived through racism. But even though we do not understand, we can still stand with and for all those who cannot stand by themselves.

On another sign held above the crowd, it read “they die at our house and we do not even know their names.”

It’s ironic that in the middle of a crowd who were socially distancing and wearing masks, used their masks not to diminish their voices, but to try to speak the final words of George Floyd even louder. Painted in black ink, the words, “I can’t breathe.” 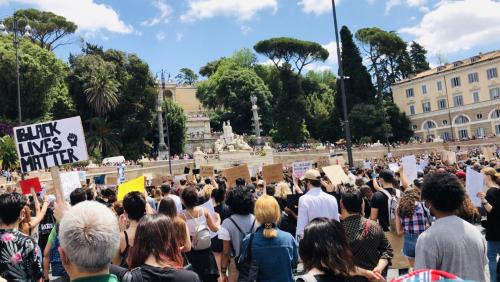