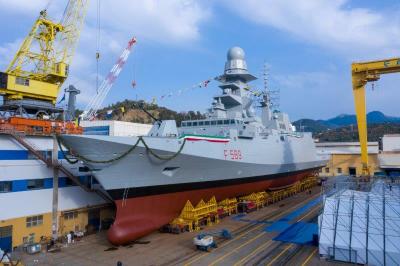 ROME – The Italian Minister of Foreign Affairs, Luigi Di Maio, has said that assessments are being made on the agreed sale of two frigates, the ‘Spartaco Schergat’ and the ‘Emilio Bianchi’, to be sold to Egypt as part of a nine billion euro contract, according to diplomatic sources. Eight frigates have already been sold to Egypt by Italy, for an estimated total value of over one billion euros as part of an even wider military contract worth up to 11 billion euros, reports Il Fatto Quotidiano.

The agreement provoked a backlash from the ‘Armed Banks’ pressure group who condemned the deal as the “contract of the century,” and called on all Italian credit institutions to publicly express their refusal to grant loans and financial services to companies involved in military sales to the Al Sisi regime. The wider military contract includes frigates, patrol boats, fighter jets, and a satellite.

‘The Italian Network for Disarmament’ and the ‘Peace Network’ have denounced the sale as "outrageous” under ‘Law 185’, which prohibits the export of armaments to countries whose governments are responsible for proven violations of international human rights, reports the Rights Observatory.

Egypt has been governed by General Al Sisi following a coup in 2013, and the authoritarian tendencies of the state have come to bear on two researchers with links to Italy; the first, the Italian Giulio Regeni, tortured and murdered in Egypt, and the second, the University of Bologna's Patrick Zaky, who is currently being held in prison on the charges of 'undermining public safety'.

The arms agreement was reached after a telephone call between the Italian Prime Minister, Giuseppe Conte, and his Egyptian counterpart al-Sisi. According to americaoggi, in the transcript of their conversation as released by the Egyptian presidency, and the name of Giulio Regeni did not appear.

General Leonardo Tricarico, president of the Foundation for intelligence, Culture, and Strategic Anaylsis (Icsa), has argued that a single person cannot dictate Italian foreign policy. "The case deserves respect and attention from the Egyptian authorities to clarify the matter, but the issue cannot guide relations between two countries," he said, as quoted in Formiche, where he cited the crucial importance Egypt plays with regards to Libya.