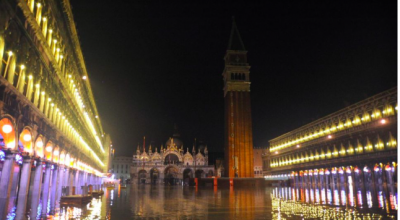 VENICE – After a night of freak weather events, high waters returned to Venice on Friday having reached 116 cm, met only twice in the past 20 years, which flooded St Mark’s Square and created problems for pedestrians without the wooden walkways installed during the usual flooding season, as shown in video footage released by La Repubblica. The rare event was caused by a disturbance out in the Atlantic, causing low pressure to pass over Veneto and coincided with a full moon that rose the tide to 85 cm.

This tidal disturbance was compounded by the pouring rain, which had been so hard as to empty the city earlier in the afternoon, reports La Stampa.

The water stopped rising late in the evening, falling short of the 120 cm expected by the ‘Centro Maree of the Municipality of Venice’, reports Corriere delle Alpi.

Venice’s flood sirens were activated, and on the island of Pellestrina, one of the hardest hit by the November storm on Nov. 12 2019, the Civil Protection Agency readied themselves to assist.

The freak weather not only affected Veneto, but also Emilia-Romagna and Tuscany.

In Bologna on Thursday night, there was not only flooding but gushing mudslides, after a violent storm washed over the road networks in urban areas such as in the town of Porretta, and caused extreme damage in the mountainous areas such as around Gaggio, as shown in Viligi Dei Fuoco's footage.

Firefighters were working on several locations into the night, with the most critical moments occurring at around 1:00 a.m on Friday, according to blitzquotidiano.

Along with reports of fallen trees and boulders, the flooding damaged houses and shops in Porretta Terme, and in Bologna, on via Flora, an apartment building was struck by lightning, reports sputnik.it.