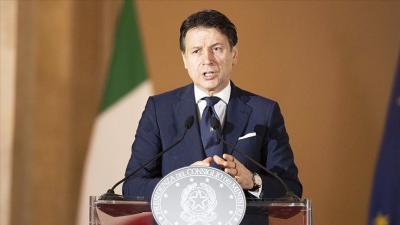 ROME – On the first day of ‘Phase 3’, which allows Italians to travel freely throughout the country once more, Italian Prime Minister Giuseppe Conte met with journalists and spoke about the next stage of the re-opening process in a televised address from the Plazzo Chigi. "We have to reckon with the economic and social emergency," said PM Conte on Wednesday, as he also apologised for delays in aid and stressed the importance of spending EU funds properly, "on which the credibility of Italy will depend.”

The Italian government's concerns have shifted to fixing the economy, and they may adopt one-off measures to support certain sectors that are close to collapse. PM Conte also looked ahead during his speach to the Italian government’s ‘Renaissance plan’ that will work on innovation, tax reform, and providing broadband for the whole country.

Addressing the Italian people, he urged them to maintain social distancing and wear masks when necessary as the boarders between the regions were re-opened, with Italy attempting to gear up in time for summer and save the tourist season, reports Il Fatto Quotidiano.

The President of Italian Society of Virology, Arnaldo Caruso, had said he was cautiously optimistic about summer, after a less powerful variant of the Sars-Cov-2 virus was identified in a laboratory. The findings, not published in a scientific journal, were made after a swab with very high viral load surprised experts because the subject had been asymptomatic.

On May 31, Alberto Zangrillo, head of the San Raffaele Hospital in Milan, said that decreases in the viral load meant that, "in reality, the virus clinically no longer exists in Italy," while on Rai television.

Mr. Zangrillo's words have been met with a backlash from the medical community, and the Italian Health Ministry undersecretary, Sandra Zampa, said in a statement that there was not enough evidence to support such a thesis and invited those who reported it not to confuse the Italian people.

American experts quoted in the Washington Post have discounted the possibility of a genetic change in the virus, stating that changes at this early stage appear to be inconsequential, and that environmental factors such as medical treatment and human behaviour probably accounts for any differences reported in Italy.