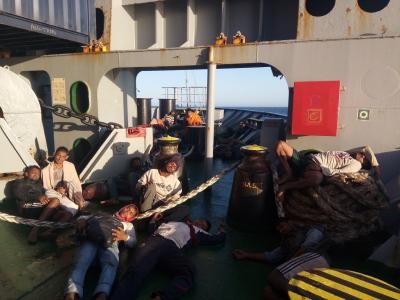 Migrants on a commercial vessel in May PHOTO CREDIT: SeaWatchInternational

VALLETTA – Four private vessels are stranded outside Maltese territorial waters with 400 rescued people on board, in what have effectively become offshore detention centers, as chaos in the Mediterranean reaches “unprecedented levels,” according to an SOS Mediterranee press release. The survivors, some of which have fled extreme violence and abuse in Libya, have been held on board these four boats for more than a month in legal limbo as international law remains unobserved.

International law requires that the local Maltese authorities transfer the migrants to disembark in a safe place, instead of keeping them on tourist cruise boats chartered by the Maltese government, which are unsuitable for long stays, claimed the press release.

“Those rescued at sea are being used for political negotiations with EU member States,” stated SOS Mediterranee. Despite the urgency of the situation, the EU response has barely proposed any coordinated solutions, with hundreds of people already having been intercepted and forcibly returned by the Libyan coast guard and commercial ships to Libya over the past two months, in flagrant disregard for international law.

The management of people making the Mediterranean crossing has deteriorated over the past four years, but with the coronavirus pandemic and the absence of NGO rescue ships, departures from the Libyan coast have spiralled out of control.

Attempted crossings increasing during the month of May. By April 8, both Italy and Malta had declared their ports “unsafe” due to the Covid–19 emergency, while previous EU agreements to ‘relocate’ people rescued at sea had been suspended.

There is a growing fear of “invisible shipwrecks” in the Mediterranean, where, as stated by the General Director of SOS Mediterranee, Sophie Beau, “people are disappearing without trace.”

SOS Mediterranee urgently called to European States to allow all rescued people stranded off Malta must disembark immediately in a Place of Safety, and re-establish and comprehensively expand upon their sea rescue operations.