Mattarella speaks of desire for civic and economic rebirth 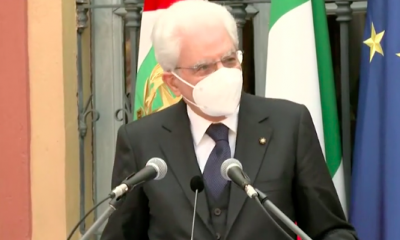 ROME – A masked Sergio Mattarella, the Italian head of state, attended the 74th anniversary of the Day of the Republic, and said in a speech that "alongside the pain for the losses and the suffering, we feel, day after day, a growing desire for recovery and rebirth." He went on to say that, as in 1946 when the Republic was born, "a new beginning is needed today to overcome divisions that has torn the country apart.”

On the Day of the Republic, June 2, the data from the Civil Protection Agency showed that the number of new infections recorded in Italy started to rise again: with an increase of 318 cases in the last 24 hours compared to the increase of 178 cases in the previous 24 hours, bringing the total to 233,515. There were 55 victims in the past 24 hours, 60 less than on Monday.

President Mattarella appealed to unity during this time, and spoke in “memory of doctors, nurses, and operators who fell victim to the virus in the past weeks.”

The head of state stressed how the need to curb the spread of the virus had imposed social limitations with the youngest in society having been temporarily deprived of the settings where they grow and learn.

Mattarella's appeal for unity was repeated by Prime Minister Conte, who posted on Facebook: " We unite and concentrate all our energies in the shared effort to get up and start again with the utmost determination.”

The ceremony for national holiday took place without the traditional parade due to the coronavirus pandemic. Mattarella listened to the Italian anthem, and then, accompanied by Italian Prime Minister, Giuseppe Conte, climbed the staircase of the ‘speaks’ to lay a wreath at the Unknown Soldier, reports La Repubblica.