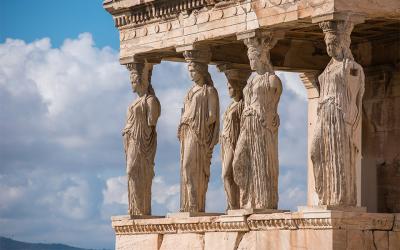 Caryatids on the Erechtheion, Athens.

ATHENS – Italian tourists arriving in Greece from the Italian regions of Emilia-Romagna, Lombardy, Piedmont, Veneto, will be subject to swabs and a quarantine of a minimum of seven days, according to a government decision announced on Sunday which has been taken badly by Venetian governor Luca Zaia, reports Il Messaggero. The whole of the United Kingdom has also been placed on the same ‘high-risk’ list by Greece.

According to data from the Italian Civil Protection Agency, the number of coronavirus victims continued to slow over the last 24 hours in Italy, with 60 people having died. The total number of infections since the start of the pandemic reached 233,197, amounting to an increase of 178.

Governor of Veneto, Luca Zaia, voiced his displeasure at Greece’s decision to block Italian tourists, stating that every country was affected by coronavirus, that it was Venetian tourists who went to Greece, and that "Greece has reduced itself to making edicts to exclude Veneto," as quoted in Il Fatto Quotidiano.

Flights arriving in Athens and Thessaloniki from these Italian regions will be subject to these checks from June 15 to June 30, due to them being on a list of ‘high risk’ areas drawn up by the European Aviation Safety Agency, and even if passengers test negative they will be required to quarantine, reports Il Fatto Quotidiano.

The Italian Foreign Minister, Luigi Di Maio, spoke with his Greek counterpart, Nikos Dendias, on Monday about the issue. Di Maio has been visiting European capitals to promote the agenda of opening-up tourism for the summer, and will visit Athens on June 9, reports Il Messaggero.

The Italian undersecretary to the Prime Minister, Andrea Martella, has reacted to the news by stating that any bans on tourists "must be coordinated at the European level, there can be no decisions of one country that penalize another and forms of unfair competition," he said on Rai 1 radio.

Italy plans to open its boarders completely on June 3 to those coming into the country from countries in the Schengen area, which provides for the free movement of peoples, with no expectation to quarantine or self-certify, according to strettoweb.

However, and despite the positive data from the Civil Protection Agency, not all the regions are united on the policy. The Sardinian government, for example, has not given up on its idea of a health passport for all those arriving on the island, and are working to reach a compromise, according to La Repubblica.

The European Commission’s President, Ursula von der Leyen, has set a deadline, June 15, for the elimination of the border restrictions in the Schengen area. However, enforcing this date will not be easy if the decisions of individual countries such as Greece continue to change, report Il Fatto Quotidiano.

The Immuni app, the anti-contagion tracking software that was announced on April 16 in Italy, was available to download from Monday in select Italian regions, as part of the test phase before its national release, reports Il Sole 24 Ore.