400 land in Sicily, search begins for those unaccounted for 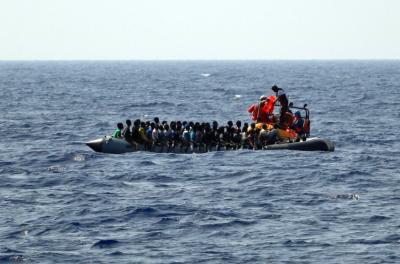 AGRIGENTO – A reported 400 migrants landed on the Sicilian beach in Palma di Montechiaro on Sunday at 2:00 p.m., with video taken by beach-goers showing an inflatable vessel moving along the coast, pushing up against the rocks, and migrants hurrying to disembark. Later that Sunday afternoon, another vessel, this time carrying 52 migrants, landed in Linosa, the tiny volcanic island in the Mediterranean.

Once the migrants landed in Sicily, they fled either into the countryside or along the roads, asking motorists on their way to Agrigento if they could hitchhike with them, reports Il Messaggero.

The local police and Carabinieri were activated along with a helicopter to look for the migrants, and three Coast Guard patrol boats were launched to search for the vessel which brought them, reports HuffPost.it.

According to the Mayor of Palma di Montechiaro, Stefano Castellino, there were actually about 300 migrants on two boats. Mr. Castellino said that the migrants were being tracked down, that those that had been had been given masks, bottles of water, tea, and donuts, and that there were witness reports of many “fleeing into the surrounding countryside,” as quoted in Agenpress.

The landing of the 52 migrants in Linosa was blocked by local police, and the vessel has been sent to Lampedusa, reports Unionesarda. Lampedusa is the larger of the two islands which along with Linosa make up the Pelagie Islands.