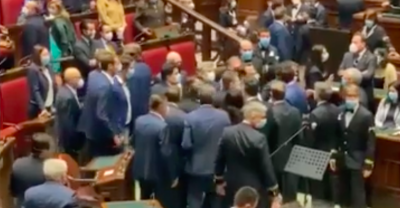 ROME – Lombardy is the only region in Italy to have registered an increase in coronavirus positive cases on Thursday, and after M5S deputy Riccardo Ricciardi gave a speech in the Chamber of Deputies attacking those opposing the measures of the Italian government, and sardonically said they should propose Lombardy as a model, a near brawl occurred in amongst the parliamentarians, with much shouting, gesticulating, and reports of a punch having been thrown, with televised video footage showing the tussling politicians. The President of the Chamber, Roberto Fico, was forced to suspend the session which was meant to debate Phase 2.

Of the 228,006 recorded cases, 86,091 are from Lombardy. The Lombardy total registered 316 more over the last 24 hours, while nationwide the rise was of 624, and Lombardy has been consistently overrepresented in the official statistics.

According to Vittorio Agnoletto, occupational physician and past consultant for the Italian National Health Service (ISS), the reason for the discrepancy is located "in the abandonment of territorial assistance and the privatization of Lombard health," as quoted from a detailed report by Il Messaggero, which reveals that in 1981 there were 530,000 beds in Lombardy, whereas in 2020 there were less than 215,000.

After the near-brawl occurred in the Chamber on the topic of Lombardy, Ex Minister of the Interior, Matteo Salvini, responded to the intervention from Mr. Ricciardi by saying he had insulted the Lombards, called him a little boy, and said that he should “rinse your mouth before talking about Lombard citizens and Lombard health,” quoted in La Stampa.

Salvini has called the Italian President Sergio Mattarella to express concerns about what he sees as the attacks of some government parliamentarians against Lombardy and his upcoming legal battle in reference to an article in ‘La Verità' on Thursday.

The article, entitled, ‘He is right but he must be attacked,’ purports to explain how several magistrates in private interviews have shown themselves incapable of conducting a fair trial. The Senate chamber had approved a request to trial Salvini, on the case of his blocking of 131 migrants from disembarking off a vessel in July 2019.