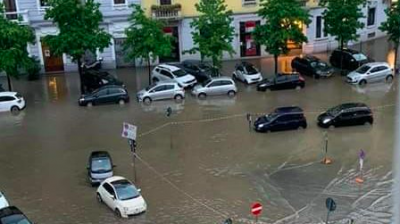 MILAN – The Seveso river, which flows through the provinces of Como, Monza e Brianza, and Milan, and which has overflowed consistently through the years, flooded again in Milan during the night as a storm battered the city and caused blackouts and flooding in Niguarda, via Valfurva, and Lambro, according to local public officials. The river flooded shortly after 3:00 a.m. on Friday morning, report Il Messaggero.

Along with heavy rains, strong winds also caused leaves and branches to fall and clog the drainage system. The fire brigade received numerous calls to roads, underpasses, and cellars that had been submerged by water, report Il Fatto Quotidiano.

Many citizens living in the Milan area have said via social media that their electricity had been cut, that streets and cellars were flooded, and, in via Valfurva, that a manhole had literally burst, reports La Stampa

Late on Friday morning the city was still flooded, leading to mobility problems across the entire network with changes to public transport. “The consequences of bad weather forced us to change the service of some lines," said the Milanese transport body (ATM), as quoted from Il Fatto Quotidiano.