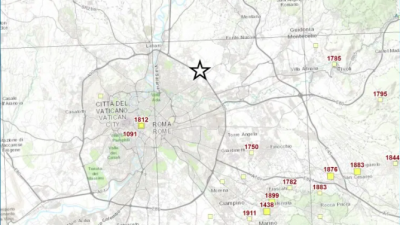 ROME – An earth tremor sent Romans into the streets at dawn on Monday, as the shock with a magnitude of 3.3 struck the Italian capital having started at a depth of 10 km, with its epicenter located in the north-east of Rome, near Fonte Nuova, according to data from the National Institute of Geophysics and Volcanology (INGV).

Evidence that the tremor, registered at 5:03 a.m. in the morning, was clearly felt, was seen in Guidonia Montecelio, Tivoli, and Monterotondo, where many people woke and took to the streets even though a storm had broken out following the tremor, report Il Fatto Quotidiano.

According to firefighting authorities, there was no damaged to either people or buildings, and there were no requests for assistance either, according to La Repubblica.

Pierfrancesco De Milito, head of the press office of the Civil Protection, told RaiNews 24 that although seismic risk was not to be taken lightly, nobody should be afraid of shocks like these, the likes of which are recorded “hundreds if not thousands (of times) during the year.”

Although the shock was brief, between six and ten seconds, even an expert like Alessandro Amato, seismologist at the INGV, said that “I also woke up at 5:03 and I was scared like everyone, even though I had perceived it was a low frequency shock.”