First day of phase 2 passes smoothly but risk of 'euphoria' 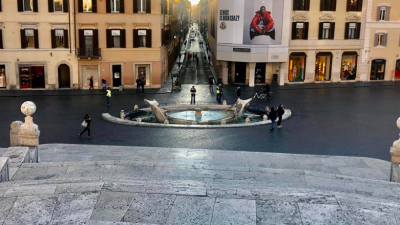 ROME – On the day that 4.5 million Italians returned to work without chaos in parks, tourist spots, or transport lines, there was no tidal wave of sanctions either, as data from the Italian Interior Ministry shows that only 3691 people were sanctioned on the first day of phase 2, a decrease compared to the 5,325 on the last day of phase 1, reports La Repubblica.

The number of people currently infected with coronavirus had fallen only by 199 to 99,980 on Sunday, but over the last 24 hours the number decreased by 1513, making the current total 98,467, according to the Civil Protection Agency. However, the daily death toll rose again by 236, bringing the total to 29,315.

Professor Gianni Rezza, director of the infectious diseases department of the Higher Institute of Health (ISS), reacted positively to the data, but warned against ‘euphoria’, and against an app making people feel overly secure. “It took some time to lower the numbers, it didn't happen overnight. But with the reopenings, I'm worried, I won't deny it," he said, as quoted in Il Messaggero.

As Italy recovers from the staggering effect of the coronavirus in April, six regions: Umbria, Sardinia, Valle d'Aosta, Basilicata, Molise, and Calabria, recorded no deaths in the last 24 hours, reports Il Fatto Quotidiano.

The State Attorney, on behalf of the Italian government, on Tuesday renounced the decision of the Regional President of Calabria, Jole Santelli, to allow outdoor table service for bars and restaurants, according to judicial sources, as an unprecedented legal dispute looks set to begin.