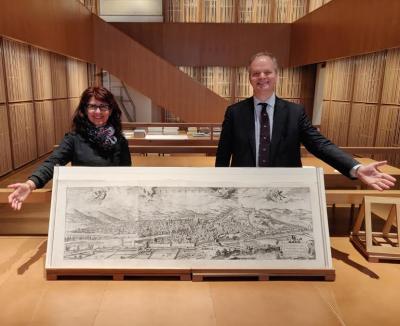 FLORENCE – One of the oldest surviving prints depicting a complete view of Renaissance Florence in tremendous detail and as still surrounded by walls that were later demolished in 1865, has been purchased by the Uffizi Gallery, according to a press release on Wednesday. Within the city walls, the monuments of the city can be recognized, such as the Duomo, Giotto's bell tower, Palazzo Vecchio, Palazzo Pitti, and the basilica of Santa Maria Novella.

Dating back to 1557, the print consists of three large assembled sheets and was made in Antwerp in the 'Hieronymus Cock' printing house and was later republished in Paris in 1601 by Paul van der Houve. It has now been bought from an antique dealer in California, in order to bring it home to the city which it represents.

Some of the buildings depicted do not have the same appearance by which they are known today. The Cathedral still has its ancient unfinished facade, and so does Santa Croce. Palazzo Pitti, recently purchased by the Medici, has a prominent place in the engraving and seems to dominate the whole Oltrarno area.

Eike Schmidt, director of the Uffizi Galleries, said that “the Galleries are happy to have acquired this very rare print. A meticulous and highly refined work that is, at the same time, a document of great sentimental value, it shows us, in all its splendor, the aspect of medieval and Renaissance Florence, with huts and gardens outside the walls, the towers, some bridges over the Arno, the splendid palaces, the monuments and the domes that are so dear to us.”

The work constitutes the second oldest view of Florence after that called "della Catena", attributed to Francesco Rosselli, and will be included in the collection of the Cabinet of Drawings and Prints of the Uffizi.

Along the upper edge of the print it bears the title "Florentia," and in the lower right a long inscription praises the qualities of Florence and its illustrious citizens, starting from the Medici family and then remembering Dante, Poliziano, Petrarca, Boccaccio, and Michelangelo. 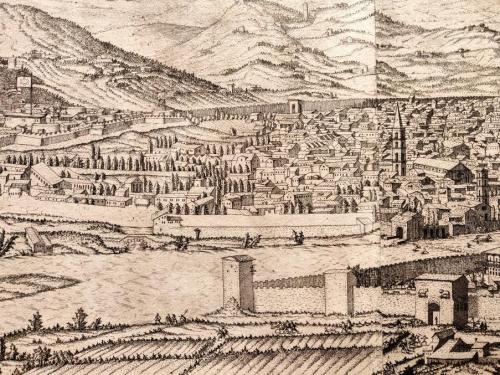