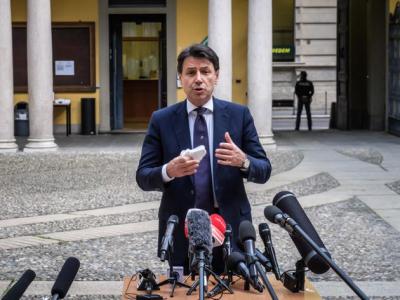 MILAN – The Italian Prime Minister, Guiseppe Conte, was in Lombardy for the first time since the coronavirus epidemic, where he met with President of the Region, Attilio Fontana, the mayor of Milan, Beppe Sala, the president of Confindustria, Carlo Bonomi, and stated in a televised statement that, "we are making many sacrifices, this is not the time to give up. This government does not seek consensus, it wants to do the right thing, even if this could displease citizens," as quoted in La Repubblica.

The Civil Protection Agency has said that the number of people infected with the coronavirus in Italy has once again started to drop, with 105,814 currently infected in Italy. On Monday, the number of intensive care patients also fell to below 2,000.

The Italian premier insisted that efforts must continued to be made, and that Phase 2 entailed coexistence with the virus, rather than a liberation from it. "I'm only coming now because I would have been in the way before," said PM Conte, who had also scheduled a visit to Bergamo, to meet mayor Giorgio Gori, and Brescia, to meet mayor Emilio del Bono.

Polling suggests that the Italian PM has been favourably viewed in Italy during the epidemic, and Italian political pollster Nando Pagnoncelli, has said that the positive image of the president and his government has benefited M5S more than the Democratic Party, as reported in Il Fatto Quotidiano.

A new Ipsos poll by Mr. Pagnoncelli finds that the League has lost almost six per cent, which has narrowed the gap with the Democratic Party, while the Five Star Movement (M5S) has grown to 18 per cent, as reported by Corriere Della Sera.