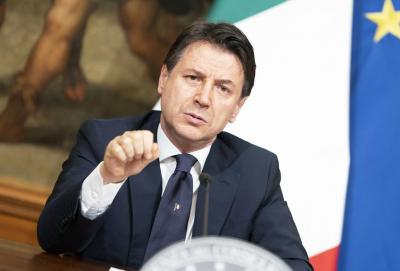 ROME – The Italian Prime Minister, Giuseppe Conte, announced that from May 4, various economic sectors including manufacturing, construction, and wholesale will go back to work. They will thereafter be followed by retailers, museums, galleries, and libraries on May 18, and bars, restaurants, hairdressers, and beauty salons on June 1, revealed by way of a nationally televised speech on Sunday. From May 4, people will be allowed to visit their relatives as long as they wear masks, parks, and public gardens will reopen, and people will be able to go jogging or bike riding beyond their homes.

The total number of Italian cases increased to 197,675 over the weekend, and the death toll rose to 26,644, according to data from the Civil Protection Agency, who have made available a free helpline offering psychological support to those who need it as the coronavirus epidemic continues. It will be open every day from 8:00 a.m. until midnight, with more than two thousand specialized professionals responding to requests for help, report Il Fatto Quotidiano.

"We are facing the phase of living with the virus, and we must be aware that the curve of the contagion could go back up in some parts of the country," PM Conte warned.

It was also revealed on Sunday that schools will not start again until September, which has prompted the President of Emilia Romagna, Stefano Bonaccini, to ask the Italian Education Minister, Lucia Azzolinina, for a meeting. “"We understand that opening schools involves an obvious risk but we want to understand what the tools will be to support families and we need guidelines and resources to reopen summer camps," he said on Radio 24.

Italian church masses have also not been given permission to resume, with the Italian bishops conference complaining that the right to practice one's religion was being impaired. Funerals, however, will be allowed with a maximum of 15 participants as long as social distancing requirements are met.

Conte added that the government will fix the price of surgical masks at a maximum of 50 cents each in order to prevent speculation, and promised "massive support" for businesses and the tourism sector in order to revitalize the economy.

Giovanni Rezza of the Italian National Institute for Health (ISS) raised concerns over the announcement while on Italian radio, and said that although he understood the political and economic necessity, “the virus will continue to circulate even if with a lower intensity but as soon as the situation relaxes, the risk is that it will start circulating faster... watch out because there is a risk that a new emergency will arise,” he told Radio 24.

"The risk is there, and we must take it on, methodically and rigorously," PM Conte said. "Responsible behavior on the part of each one of us will be essential: if you love Italy, you must avoid the risk of spreading the contagion.

“If we don't respect the distance the curve will go back up and it could go out of control, our deaths will increase, and at that point the damage to our economy could become irreversible."