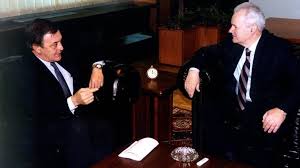 Beppe Zaccaria, who has died at age 69, was a star foreign correspondent for la Stampa newspaper covering the Balkans and the Middle East with distinction throughout the disintegration of Yugoslavia. He went on to become effectively an informal ambassador to the West in Belgrade using his formidable knowledge of the seductive city and his beloved Serbia to facilitate business, cultural and diplomatic contacts with Rome and the EU.

Zaccaria climaxed his swashbuckling career by obtaining a lengthy interview with the former Yugoslav President, Slobodan Milosevic a short time after the Socialist demagogue was ousted and placed under house arrest in an almost bloodless popular uprising in October 2000, marking the last time the former warlord spoke with the media before he was eventually extradited to the International Tibunal for war crimes at the Hague where he stood trial but cheated prosecutors by dying in jail before a verdict was decided.

A native of Bari, Beppe studied jurisprudence at university in the Apulian port city that traditionally has been a gateway to the Orthodox world. He seemed destined to follow in the footsteps of his father, a magistrate and anti-Mafia prosecutor who had served as an interpreter for the Wehrmacht on the Russian front in the Second World War, but instead joined Il Messaggero newspaper in its Milan office, where he charmed colleagues by supporting AC Milan football club despite his southern origins.

He joined La Stampa as Naples correspondent in the 1980s. His outstanding work covering Italian left-wing and right-wing terrorism and organised crime paved the way for his assignments as a special envoy and war correspondent for the prosperous newspaper, owned by the Agnelli family, in a constellation of hotspots from Sarajevo during its siege by Bosnian Serb forces to the Albanian mountains in the Kosovo war, the vicious East Timor conflict in Indonesia and several more recent spells in the mean, sand-swept streets of Baghdad.

Zaccaria was one of the first Western journalists to disclose the extent of ethnic cleansing in the former Yugoslavia by both the Bosnian Serbs against the Bosnians and Croats and later by Tudjman’s Croatian forces of Serbs in the former Yugoslavia. He admired amd was friends with Peter Nichols, the longstanding Rome correspondent of The Times who had an office for years in the La Stampa building, and worked closely with Ed Vulliamy, the ground-breaking Rome correspondent of the Guardian who also later had a desk at La Stampa.

At that time rivalry between the top foreign reporters of the big Italian newspapers could be fierce. While many foreign reporters from Italy hunted as a pack often sharing information and contacts, Beppe faced considerable competition from Valerio Pellizzari, the outstanding reporter for Il Messaggero who worked as a determined lone wolf, scoring a scoop with an exclusive interview with Bosnian Serb commander General Ratko Mladic at the height of the ethnic cleansing of Bosnian Muslims and going on on to interview Milosevic a few days before he left the presidential palace. The Corriere della Sera deployed one of its most experienced correspondents, Renzo Cianfanelli, to the Balkan beat.

As an uneasy peace returned to the Balkans in the first decade of this century, Beppe became something of an institution in Belgrade, where he worked for a time in the press office of the Serbian branch of Fiat. Dubbed ‘Don Giuseppe,’ by some of his Serbian friends, he would sometimes treat his guests to an operatic aria as the highpoint of a meal at the Writer’s Club in Belgrade, a Felliniesque haunt frequented by writers, actresses, spies and jet-setters that never closed throughout the misguided NATO bombing of Serbia in 1999.

Zaccaria was in his element holding court at the smoke-filled Club with a table of well-informed guests such as Slobodan Markovich, the historian or Bosko Jaksic, the foreign editor of Politika newspaper, and visiting Times of London scribes such as Janine di Giovanni and Richard Beeston. Serbian intelligence chiefs under Milosevic and afterwards recognized Zaccaria as one of the few correspondents able to steer away from stereotypes about the Balkans and one of their most charming female collaborators was given free reign to open doors in the Belgrade political establishment for La Stampa. In Rome Beppe had a regular table at Tullio’s restaurant near the La Stampa office.

Beppe was one of the founders in 2005 of the English-language Belgrade Times newspaper, which provided news and analysis for the diplomatic and foreign business communities in the former Yugoslavia but ceased publication when its Italian owner abruptly ran out of cash. The newspaper, printed in Serbia but edited largely in Rome, was modelled in part on the successful English-language Moscow Times title. It brought together briefly in a creative team a number of gifted reporters and fixers who previously had worked for La Stampa and the Times of London including Dragan Petrovic, Alex Brkic and John Phillips.

Beppe was enormously generous to his many friends and all who worked with him, thinking nothing of paying the school fees for children of a colleague who lost his job or helping a reporter marooned in Belgrade without funds.

He married, in Calabria, Anna Maria. She survives him together with their children Domenico, Paolo and Catherine.