Experts outline the Middle East in potential after COVID-19 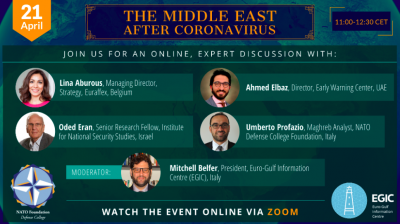 The panelists at the EGIC event

ROME – In the Middle East, the effects of the coronavirus are creating new regional challenges and potentialities, and this was the subject under discussion in the fifth online event in a series hosted by the Euro-Gulf Information Centre (EGIC) in collaboration with the NATO Defence College Foundation. The panel of speakers included: Lina Aburous, Managing Director at ‘Euraffex’; Oded Eran, Senior Research Fellow at the ‘Institute for National Security Studies’; Umberto Profazio, Maghreb Analyst in ‘NATO Defense College Foundation’; and Ahmed Al Baz, Director at the ‘Early Warning Centre’. The discussion was moderated by Mitchell Belfer, EGIC President.

The discussion focused in particular on the global changes that are likely to impact the Middle East. The first thing to note, as Mrs. Aburous pointed out, is that we appear to have been temporarily jolted into a de-globalised environment, despite the deterministic narrative of the 1990s that hinted at a future wherein everybody shared everything.

“The thinking will be inwards,” Mrs. Aburous said, referring to the collapsing legitimacy of intra-governmental actors, whether global UN organisations or regional bodies such as the Arab League, and relative to this, the nation-state has reasserted itself as the primary organisational force in the world.

Mr. Profazio and Mrs. Aburous both pointed to regional institutions such as the EU as having failed on the matter of the refugee crisis, but Mr. Profazio took an optimistic take from this, having seen a recent “uniting of the global north and global south,” precisely because the role of intra-governmental bodies have been thrown into question. If problems are systemic and deep enough, then a crisis such as a pandemic can seen as the cure for the ruling neoliberal model that, in part at least, has created problems in dealing with the pandemic.

The current economic world order appears not to be well suited to sharing damage and fostering a spirit of mutual aid, even in the context of the pandemic. The impact this will have on the Middle East was stressed by Mr. Eran, who referred to Lebanon's forecasted GDP growth, expected at -12.019 per cent in Dec. 2020, as just one of many Middle Eastern countries who will be suffer disproportionately, with the Middle East still not having recovered from the unrest of the Arab Spring – something Mr. Eran referred to as a “double effect.”

Even the more stable areas of the Middle East will not be able to escape economic reality. As Mr. Eran stated, tourism “is probably one of the (sectors) most hard hit and will take the longest time to recover, because people will think many times before they board a plane.” What the region needs, Mr. Eran continued, was regional cooperation “to facilitate movement” and “to make (tourism) safe and easy.”

Regional cooperation needs to be initiated from upper political echelons, and the very real danger in the Middle East is that this will be completely overruled by self-preservatory competitive instincts. Mr. Al Baz pointed to how nation-states were already thinking this way, with the 100 million dollars Jordan were meant to receive over next five years from Wafra, Kuwait’s national investment company, having been thrown into doubt.

Although Mrs. Aburous rightly reminded the online audience that it was “too early to say if there will be any changes to the DNA of the region,” there are some worrying trends that seem suggestive as to how the region might change. Mr. Al Baz pointed out that countries that are more interlinked with the rest of the world will be able to withstand the worst of the economic fallout, while others, such as Iran, will not. When this happens, they may slide into more dictatorial tendencies than ever before.

The Middle East, therefore, might be faced with a crucial period of time in which authoritarian regimes will look to upgrade their state powers, especially by way of big data and other surveillance methods, and try to get away with it under the cover of covid. While the United Arab Emirates (UAE) have been using data to monitor people and strengthen the public health response, the temptation will be to keep these emergency powers.

Mr Profazio used the example of Algeria to show how nation-states are already using the crisis to reinforce authoritarian trends, where the “authorities have used the pandemic to crack down on protesters and press freedoms,” with the arrests of activists and journalists having intensified, and with certain news websites having been suspended.

In the Q and A section of the discussion, Mr. Belfer, after exercising some of his own dictatorial moderator privilege, adapted a question from the audience and asked the panellists whether the impact of coronavirus would lead eventually to nationalism or a revived internationalism.

These two potentialities are currently at loggerheads, with inward-looking nation-states asking existential questions of their regional blocs, without having asked the more fundamental existential question as to whether the nation-state can survive without them in the modern world. This will be keenly felt in the Middle East. “If Palestinians, Egyptians, and Jordanians can’t work outside their home countries, where will their incomes come?” asked Mr. Eran.

The re-globalising project was advocated for by the panellists, albeit with disagreements as to whether this re-globalisation was inevitable given technological advancements.

In one potential world, pan-Arabism, eclipsed since the 1980s, rises reformed from an Egyptian tomb and, although perhaps not universal enough to be justified, creates at least the potential for regional cooperation.

In another potential world, pan-Arabism, eclipsed since the 1980s, remains entombed or else rises unreformed and bearing the ugly face of Nasser, and nationalism reasserts itself at the expense of regionalism; a future that will be covered in greater detail in the next EGIC event. 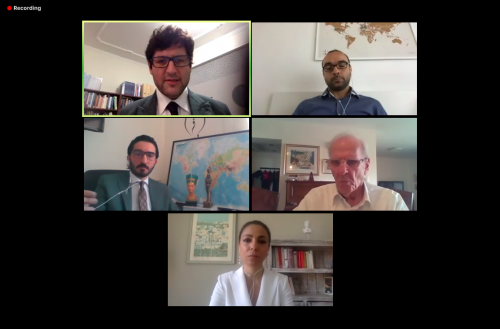