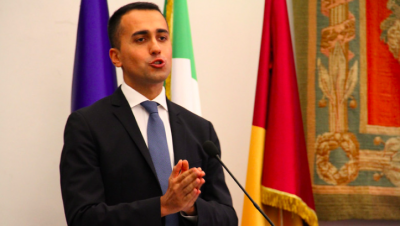 ROME – The Italian Foreign Minister, Luigi Di Maio, spoke on Wednesday about his intent to carry out a study into discrepancies regarding the contingent of military doctors and Russian personnel who arrived in Italy to contribute to the fight against the coronavirus epidemic, with the role of 21 men not clarified, report La Stampa. The Russian ambassador in Rome, Sergey Razov, had claimed that there were 122 doctors and 600 ventilators, but this figure was thrown into disrepute after the Italian Defence and Foreign Affairs department reported a figure of 32 health workers and 150 ventilators.

Di Maio said that although it was not his specific area of competence, “the only thing I reserve the right to investigate is who is part of the Russian military team on our national soil," as quoted in La Stampa.

In a videoconference call on Wednesday, Supreme Commander of the Atlantic Alliance in Europe (NATO), the American General Tod Wolters, said that NATO is monitoring the situation, and that he is paying "close attention to the malignant Russian influence," in an interview with Corriere Della Sera.

In March, the Russian ambassador in Rome, Sergey Razov, defended the help Russia provided to Italy, repeatedly stressing that it was “free of charge” and that Russia wanted to help “the friend of the Italian people, regardless of the international political context,” as quoted from an interview with Agenzia Italia.

The Russian General Igor Konashenkov had made the threatening remark that “he who digs a hole will end up in it.”