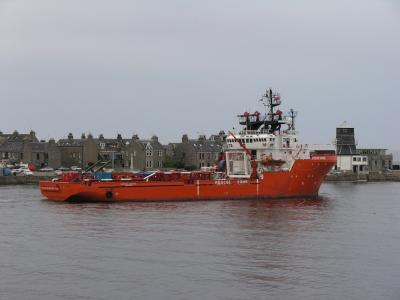 MARSEILLE – The ‘Ocean Viking’ rests in the port of Marseille with work being done to resume its lifesaving operations with as early as possible, despite a minimum level of clarity available to conduct its operations, according to a SOS Méditerranée press release. The NGO has raised its concerns that the coronavirus outbreak has and will lead to severe disruptions of the maritime sector exacerbated by the unpredictable response of European States, with several already having announced they are not able to provide places of safety  or to assist in the disembarkation of those rescued.

“Political developments have aggravated the ongoing humanitarian crisis in the Central Mediterranean and highlighted the risks faced both by crews conducting rescue operations and survivors,” read the statement.

In the Mediterranean, NGO ships were already having to fill the gap left by States with their lifesaving operations based on maritime law. Maritime Search and Rescue (SAR) operations throughout the world are designed, however, to be carried out with the support and coordination of States.

“While we fully acknowledge the extremely difficult situation States are currently faced with during this pandemic, public health concerns and containment measures should not come at the expense of any life-saving operations which remain obligations inscribed in long-standing international maritime law,” SOS Méditerranée claimed, pointing to Libya as an area of particular concern.

More than 1,000 people have been reported to have fled Libya onboard unseaworthy boats in the past ten days, read the statement, with hundreds having been intercepted and forcibly returned to Libya, whose ports have been declared unsafe due to ongoing shelling from rebel forces in the country.

“States and citizens have shown remarkable examples of cooperation during the COVID-19 crisis, expressed solidarity towards healthcare workers and provided assistance to those in need. The duty to rescue people drowning at sea needs to be fulfilled with the same sense of solidarity and care”, said Frédéric Penard, Director of SOS Méditerranée Operations.

The unprecedented international context has not only divided NGOs and States, but also NGOs and other NGOs.  SOS Méditerranée’s medical partner is Médecins sans Frontières (MSF), but with the organisations differing on how to approach the resumption of activities, SOS Méditerranée reported that: “last week MSF informed us of their decision to withdraw from the partnership. SOS Méditerranée acknowledges this decision, which comes as a sad one for our teams due to the remarkable cooperation both of our organisations have experienced on board the ‘Aquarius’ and the ‘Ocean Viking’, doing the utmost to save as many lives as possible.”

SOS Méditerranée paid tribute to MSF in the press release and said that it will continue to be the case that “numerous humanitarian and medical crises around the world will benefit from MSF assistance.”