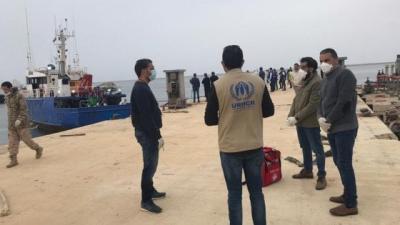 TRIPOLI – Four dinghies in the Mediterranean were reported as in distress on Sunday, and, after spending four and a half days at sea and losing contact with mainland rescue services, the fourth dinghy was found and moored in Tripoli on Wednesday having been rescued the night before by a commercial ship in Maltese territorial waters, according to the International Organization for Migration (OIM). It had 51 survivors, one of which was a 42-day-old baby, and five corpses on board who were “dead from hardship and despair because of a Europe that has chosen not to save them,” read a Seawatch tweet on Wednesday.

On Monday, the Italian Coast Guard dismissed the allegations of SeaWatch when they claimed that the migrants had been rescued by the Libyan authorities successfully, and their press release statement said that: "the transmitted images do not reveal the presence of bodies, wrecks, or floating objects in the sea, near the dinghy or in the surrounding area.”

Alarm Phone, the telephone service for migrants in difficulty which received the Sunday distress calls, have also tweeted condemning the Maltese authorities of refusing to help the boat, and that “survivors have been brought back to war, torture, and rape in Libya.”

This week, Malta’s foreign minister, Evarist Bartolo, described NGOs assisting migrant rescues as encouraging human traffickers, and that it was “an inhumane act,” as quoted in MaltaToday.

The Libyan branch of the International Organization for Migration have stressed that those found at sea should not be returned to unsafe ports, and to do so violates international law.

"No one can be brought back to Libya while in international waters," said Carlotta Sami, spokesman for Italy for the High Commissioner for Refugee Rights. "It is not the first time this has happened: in the other episode too, it was Malta who coordinated the rescue," as quoted in La Repubblica.