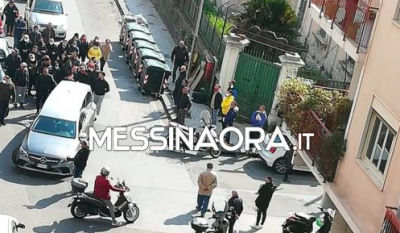 MESSINA – A hearse carrying the corpse of Rosario Sparacio – the brother of Luigi Sparacio, head of an Italian mafia branch of the ‘Cosa Nostra’ during the 1990s – was followed by a procession of family and friends on Friday, and the scene was captured in a photo published by MessinaOra. Rosario Sparacio, convicted of a variety of crimes in the past, and his son, Salvatore, has also been sentenced for a mafia-related crimes, as reported in Il Fatto Quotidiano.

It has been forbidden to celebrate funerals in Italy since March. 8, and there has been online outrage that the mafia seem to be exempt, as the health crisis has left thousands dead without a funeral. Law enforcement officers are attempting to identify those present on Friday, with the photo showing many young people in the procession on via del Santo, with some riding mopeds and driving cars. In total, around 100 people were present, report Il Messaggero.

Relatives of the deceased took to Facebook to complain about the coverage in the media, with a granddaughter of the deceased writing: “There was no funeral! There was a procession on foot and of course the family was present, then some friends came without our knowledge…” as quoted in MesssinaOra.

Francesco D'Uva, Deputy Quaestor at Montecitorio, tweeted on Monday: “I have confirmation of what was reported in the press: days ago in Messina the funeral procession of the brother of the mafia took place. It is very serious.”