Lack of agri labourers puts fruit and vegetables at risk 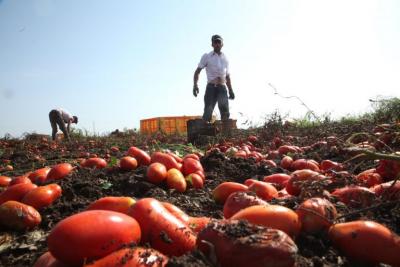 ROME –  Some 200,000 labourers are needed across Italy so that fruit and vegetables don't rot in the fields, according to the president of Confagricoltura, Massimiliano Giansanti, who stated in an interview with Corriere della Sera that “in Italy there are about 1.1 million agricultural workers, and of these the regular foreign workers are just under 400,000, or about 36 per cent, the vast majority of which are Romanians.”

On Tuesday, for the first time in Italy, less than 1,000 tested positive for the coronavirus, the lowest daily rise since March 10, the Head of the Civil Protection Agency, Angelo Borrelli stated. The official Italian figures now stand at 94,067 people currently infected, although ISS have warned that this might be an underestimation. However, the suppression tactics employed to cause a reduction in the contagion rate has led to a dearth of labourers in the countryside.

In one regional example, Umbria has a shortage of 3000 labourers over the next three months, which risks neglecting produce such as tomatoes, peppers, courgettes, tomatoes, celery, and melons. The President of Confagricoltura Umbria, Fabio Rossi, gave three reasons for the manpower problem: the return of foreign workers to their home countries, sick leave, and a lack of organisation, reported Corriere Dell Umbria.

To address the problem, the Italian Minister of Agriculture, Teresa Bellanova, has already extended the residence permit for foreign workers until the summer, and suggested that it should be further extended until December. Mrs. Bellanova, who also spoke about remedying the 'ghetto-barracks' that labourers are subject to and about regularising immigrant workers, has prompted a backlash from the Northern League, reports Il Fatto Quotidiano.

The European Commission has published guidelines for member states to create 'green lanes', and set up ad hoc procedures for migrants. Mrs. Bellanova met with the Romanian ambassador to Italy on Monday. “It is necessary to identify shared solutions country by country” she said, quoted in Il Sole 24 Ore.

The agricultural sector is far more dependant on irregular immigrants than seasonal workers, and under the pressure of the coronavirus emergency, the work conditions for irregular labourers has worsened in Italy, reports Gamberorosso.