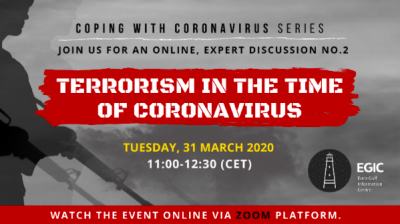 ROME – With the world distracted by the coronavirus pandemic, the health crisis might seem the perfect chance for terrorist groups to strike, and this was the subject under discussion at an online event hosted by the Euro-Gulf Information Centre (EGIC) on Tuesday. The panel of speakers included Mitchell Belfer, President of the ‘Euro-Gulf Information Centre’, Yan St-Pierre, CEO of the ‘Modern Security Consulting Group’, Caroline Varin, Senior Lecturer in 'Security and International Organisations', and Peter Neumann, Senior Fellow of the 'International Center for the Study of Radicalisation and Political Violence'. The discussion was moderated by freelance journalist, Sofia Barbarani.

“Terrorism,” said Mr. Neumann, “is about creating attention, having an audience, manipulating our minds through fear.” Rather than serving the terrorist’s needs, then, the coronavirus has actually stripped terrorist groups of their power. Currently, we all fear the invisible enemy much more than we fear any visible one, and on top of that there is also the problem of there being less busy public targets. The coronavirus has somewhat stolen the show, and although biological weapons have long been sought by terrorist groups, they have been outdone by nature.

But every crisis can be used as an opportunity, and there are ways terrorist groups have been using the global pandemic to their advantage.

Mr. St-Pierre spoke to how extremist groups will mould the pandemic to justify their extremist positions, whatever their positions are. For the extreme right, the virus has come either from a foreign invader, validating their position of shutting boarders, or else from the ‘deep state’, validating their various conspiracies. For the extreme left, the virus has emerged in the midst of systemic oppression, and validates positions such as the abolition of boarders or militant anarchism.

The virus will be made to fit into their narrative, Yan St-Pierre explained, using the example of religious extremists. “Pandemics already have a religious feel,” he said, and will be “seen as God’s intervention.”

In the short term, the coronavirus gives terrorists a chance to gain legitimacy. Al-Shabab, have taken up a public safeguarding role. Hezbollah, are trying to present itself as a responsible partner in government in Lebanon. The Houthi movement, in Yemen, are following WHO protocols.

These steps are being taken by terrorist groups as part of a public relations strategy, and represent a minor short term shift in the way they operate. Even terrorists fear getting infected, as Ms. Varin pointed out, with ISIS having produced a communique instructing its adherents not to travel, so that they do not bring back the contagion with them.

Ms. Varin’s biggest concern surrounds the high levels of unemployment that are to come, especially with youth unemployment. “Even those not radicalised online are facing a future beyond their control which is creating a very significant generational divide,” she said.

In areas of the world which are not fully economically developed this can be particularly dangerous. Mr. Neumann spoke to how several economies were already struggling, and that although there was no automatic translation into violence, there would be increased opportunities for it, as he likened the recession to come, to that of the 1920s.

With that bleak historical comparison in mind, both Ms. Varin and Mr. Neumann raised concerns over food chains. Ms. Varin’s speciality is in Africa, currently ravaged by a locust plague, which will lead to food shortages that “even traffickers and organised criminals are not going to be able to address to the extent necessary.” Mr. Neumann put forward the same point but with a different emphasis. For him, “this is the hour for organised crime,” in which the gaps not filled by states will be filled by nefarious non-state actors.

Terroristic activities in the time of coronavirus probably won’t be very active. It is the long term, which might more accurately be called the post-crisis crisis, which had the experts on the panel most worried. As Mr. Neumann said: “I foresee an extended period of instability like the Arab Spring, but without the optimism.”

Where is this most likely? To touch again on the issue of food supplies, the Gulf states are food importing countries which makes them more vulnerable than they already are to instability. Mr. Belfer outlined why Iran has a particularly “ugly” period ahead of it.

Iran has severely mismanaged the coronavirus crisis, perhaps more than any other nation. Before the crisis struck, medical supplies were given away, and to explain that, the regime now has to blame foreign sanctions, even though much of the medical equipment is not under sanction. After the crisis struck, and even though the Islamic Revolutionary Guard (IRGC) controls all entrances to and exits from Iran, passports were not stamped – an indication of the level of regional cooperation. With sheer incompetence matched only by the scale of corruption, the result is that Iranians have been left to die in the street from COVID-19.

“This could be Iran’s Chernobyl moment,” said Mr. Belfer. “I think Iran will have the most acute challenge since the Iranian revolution once the dust settles. (The Iranian people) don’t want a government that spends money on missiles, on cells in Bahrain, on militias in Iraq, or on war in Syria.”

The Mullahs in Tehran have lied to the people before, but lying to their people about who’s to blame for the coronavirus might be to go one step too far. And once Iranians aren’t afraid of the virus, Mr. Belfer predicts that they will once more take to the streets.

If the coronavirus topples regimes and keeps the eyes of the world’s policemen preoccupied, then a vacuum could emerge for terror groups to fill. Even ISIS waits in the wings for the west to withdraw from the region, and as Ms. Barbarani mentioned, the west are currently in the process of doing just that. 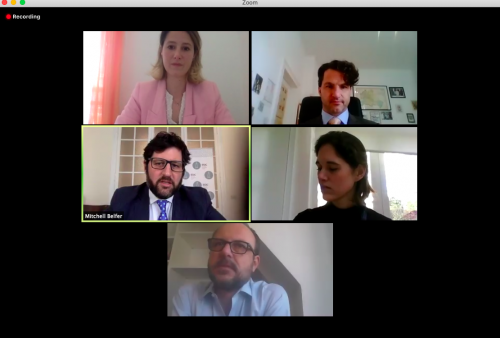