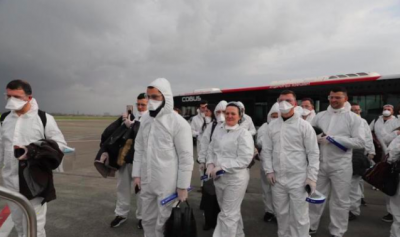 VERONA – Albania has become the latest country to send a team to support the Italian health crisis, with 30 doctors and nurses landing in Verona airport, bound for hospitals in Brescia and Bergamo, diplomatic sources revealed on Sunday. The team was welcomed by the president of the Lombardy region, Attilio Fontana. “We will help Italy. We do not abandon our friend in difficulty," the the Albanian Prime Minister, Edi Rama, in a social media video, who stressed the debt Tirana owes Italy and that Albania was not rich like others who had turned their backs.

The gesture of solidarity was well received in Rome, with the Italian Prime Minister, Guiseppe Conte, tweeting his thanks, and with the Italian Minister for Regional Affairs, Francesco Boccia, tweeting that the arrival came with "great emotion for everyone and for those who, like me, were in Bari on August 8, 1991." In 1991 Albania was still the 'People's Socialist Republic of Albania', and was in dire economic straits, which led to a mass exodus to Italy when the Italian government appeared to welcome Albanian migrants, only to then try to stop the overcrowded cargo ship 'Vlora' from docking.

"Viruses don't need visas and cannot be thrown overbaord," said PM Rama as quoted in La Stampa. "We decided to help Italy because even if in Albania we have deaths and contagion, Italy's situation is worse than ours."

Albania is not an EU member state, having applied for membership in 2009 and having been an official candidate for accession to the EU since 2014. It joins a growing list of non-EU countries to have sent Italy aid, which includes Cuba, China, and Russia.

On Sunday, ex Interior Minister of Italy, Matteo Salvini, revealed that he called the Albanian PM to thank him personally for the medical team's assistance.

Mr. Salvini has increasingly added his voice to the ‘Italexit’ cause, which would see Italy leave the EU, arguing that Italy could be printing money during the coronavirus crisis like many other countries, if not for the constraints of the eurozone, in an interview with Corriere Della Sera.

The Italian Foreign Minister Luigi di Maio has also spoken out, stating that “Europe today has the opportunity to show solidarity with one of the founding countries of the EU,” in an interview with Euronews.

Meanwhile, in an interview with La Repubblica, the Italian Sports Minister has said that the EU is a failed dream and that "we are on knife edge: after the first two weeks of closures and sacrifices, there is the risk of moving from trust to anger.”