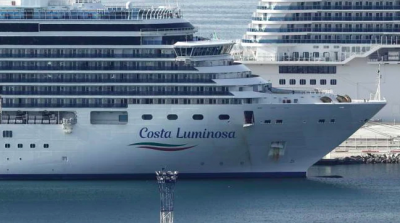 ROME - Lazio regional authorities complained that they hadn't been informed by the Italian Civil Protection Agency about the transfer of 229 tourists to Rome from the Costa Luminosa cruise ship, and only found out when British embassy asked for information on Friday amidst all the confusion, reports Il Messaggero. Most passengers were British, and the British embassy took the lead in organising flights home for British passengers, with many Australians and New Zealanders also returning home on the condition that they tested negative for coronavirus.

The Costa Luminosa docked in Savona on March 26, after which 76 passengers left the cruise ship on buses and were escorted by police to the Golden Palace Hotel in the center of Turin, report La Stampa.

However, the plan to disembark passengers could not be completed on March 28, with the Lombardy regional councilor for Civil Protection, Giacomo Giampedrone, arguing that the region was too affected by the epidemic, reports La Repubblica.

The Costa Luminosa originally set sail on March 5. Three days after departure, an elderly couple came down with coronavirus symptoms, disembarked, and were taken to hospital, before the ship continued on its way, reports Corriere Della Sera. Even as passengers sickened, the cruise ship was slow to act to prevent infections, despite two previous serious outbreaks on other company ships.

Around the world, dozens of cruise ships have been prevented from docking with passengers left in floating prisons because of the coronavirus emergency.