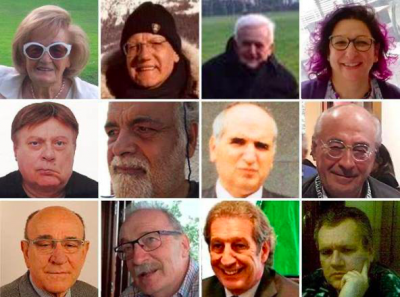 ROME – The number of doctors infected with coronavirus has risen to 6,205, and 45 have died as a result of the coronavirus, reveals a list published by the The National Federation of Orders of Surgeons and Dentists (FNOMCeO). The list, which is to be updated regularly, ends with a poem attached to it.

Each name on the list is that of a remarkable person. Some had wives and children, and died alone, separated from their loved ones without a chance to say goodbye, report Corriere Della Sera. Five have been recorded below.

Roberto Stella, 67, was President of the Varese medical association, and was the first doctor to have died.

Vincenza Amato, 68, the only female doctor to have died while on the frontline.

Ivano Garzena, who, at 49, was one of the youngest doctors to have died.

Gaetano Autore, 69, who died while incubated, and who stayed to work instead of choosing to take retirement.

Although applause for medical staff might have been well received, it does nothing to assuage the conerns of many doctors and nurses over the lack of protective equipment.

On Thursday, Dr. Filippo Anelli, on behalf of all the Italian Medical Orders, published a co-signed letter in the British Medical Journal, in which he stated that medical equipment such as gloves, disposable gowns, protective visors, and masks were still lacking even at this stage in the epidemic.

The Italian Foreign Minister, Luigi Di Maio, said during an interview on Tg1 that "10 million masks have arrived in Italy this week and I want to say clearly that we need to accelerate as much as possible on distribution.”

On Thursday, over 3 million of those masks arrived in Rome from Shanghai onboard an Alitalia flight.

In order to increase the supply of masks, twenty-five prisons throughout Italy have been producing a per day total of about 10 thousand surgical masks, report Il Fatto Quotidiano.