Those healed in Italy rises, new infections and deaths down 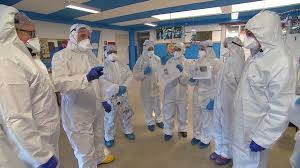 ROME – For the fourth day the number of positive cases of coronavirus decreased in Italy, to 3491 in the last 24 hours, compared to 3612 on Tuesday, and the fluctuating death toll also dropped to 683, from 742 on Tuesday, according to the figures released by the Civil Protection Agency. The numbers of those who have recovered from the virus grows to 9362, a jump of 1036 in the last 24 hours.

The new official total is 57,521 of current positive cases and 7503 deaths, with the figures relayed by the number two of the civil protection agency, Luigi D’Angelo, rather than the head, Angelo Borrelli, who came down with feverish symptoms on Wednesday and has been tested for coronavirus.

The Italian health services continues to struggle, and ambulance calls have increased by 1400 per cent, according to Il Fatto Quotidiano. In order to enforce social distancing, the Italian Council of Ministers approved a decree on Tuesday which increases the severity of the sanctions on those who violate social-distancing rules, with fines of up to 3000 euros and up to five year prison sentences.

Although the death roll and the numbers being infected has dropped, both are still markedly high, and the health service in Lombardy remains overwhelmed.

There are also concerns that the virus has shifted to other regions, with numerous potential hotspots about to break out, with data from Piedmont and the lack of intensive care places in Campania two worrying examples, according to medical experts in Il Messaggero.

In a televised speech on Wednesday, the Italian Prime Minster Giuseppe Conte called on the nation to come together and said that "we are fighting an invisible and insidious enemy who enters our homes, has forced us to redefine interpersonal relationships.”