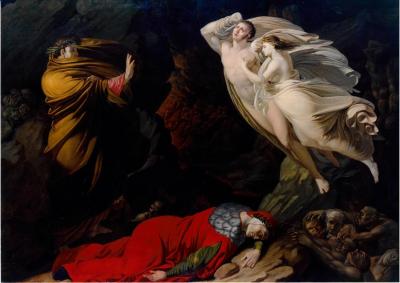 FLORENCE - ‘Francesca da Rimini in Dante's Hell’, a masterpiece by Nicola Monti, has been added to an online exhibition that provides a virtual tour of the Uffizi Gallery on Tuesday and Wednesday, with the art museum having been closed due to the coronavirus epidemic, according to an official press release.

The canvas oil painting was completed in 1810, and the Uffizi Gallery purchased it to put on display as part of the ‘Dante's images from the Uffizi Galleries’ exhibition. It takes its inspiration from the fifth canto of Dante's poem.

“The painting reflects the solitary and tormented soul of this artist, endowed with fruitful fantasy and a remarkable wealth of invention,” as described by the Uffizi Gallery.

Nicola Monti was not only an extravagant artist in Tuscany but was also a prolific writer, and authored numerous theoretical and biographical writings including the ‘Trattatello sul Nude’, a manual of teaching practice in force in the 19th century at the Florentine Academy, and ‘Poliantea’, a diary through which he reconstructs a three year trip to Poland and Russia.

The online exhibition will include 11 works, including paintings, drawings, and sculptures from the fifteenth to the nineteenth century, and includes a famous fresco by Andrea del Castagno, depicting Dante and scenes from the Divine Comedy, the ‘Entrance into Hades with Virgil’ by Livio Mehus, and other masterpieces by Cimabue, Giotto, Botticelli, and Pio Fedi.

"Dante is part of the Uffizi Gallery heritage,” commented director Eike Schmidt, refencing the Uffizi’s Dante collection. “We participate as protagonists, with pride, in the first national holiday of Dantedì, with digital means that in this period of physical isolation have become fundamental tools of bonding between all Italians. No historical person represents the unity in the diversity of the various peoples of Italy like the High Poet does."