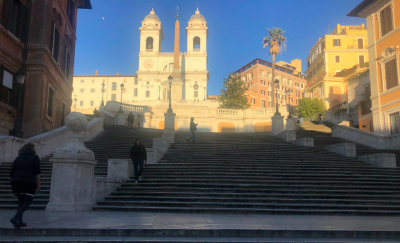 The deserted Spanish Steps in Rome

ROME - The government has launched the ‘Cura Italia’ decree, or the 'Cure Italy' decree, worth 25 billion euros, which will aid Italian doctors, workers, families, and businesses. “It is a powerful economic manoeuvre. We have not thought of and do not think of fighting a flood with rags. We are trying to build a dam to protect businesses, families and workers," said Prime Minister Giuseppe Conte at a press conference in the Italian capital.

In the Lazio region on Sunday there were 87 new cases and three deaths, but the local councillor for Health and Social and Health Integration, Alessio D'Amato, has stated that prepardness measures are ongoing in case of a spike, and Lazio has a network of about 1,500 ICU places available for emergencies throughout the region, reported in Il Messaggero.

The brunt of the government's decree is aimed at lessening the damage to the Italian economy, and includes offering income support, child support, and a suspension of payments such as electricity, gas, water, and waste, which will last until April 3.

The Italian Economic Minister, Roberto Gualtieri, asked the public not to take addiational income support if they did not need it so as to reduce the stress on the state, which will come to bear on how well the Italian health system operates.

With global markets plummeting and Italy at risk of a recession, the decree also includes an emergency redundancy fund, so that employers who are impacted by the pandemic can apply layoff payments.

The Italian retail and wholesale sector is particularly at risk, while the Italian tourism industry has already moved from on life-support to flatlining, as attested to by the famous and utterly emptied Italian landmarks.

The EU closed its boarders for 30 days on Monday, with the aviation industry at risk of complete collapse. Commenting for the Times, a leading aviation consultancy has warned that most of the world’s airlines will be insolvent within 10 weeks, as national governments are not yet acting together to save the industry.