Ambulances stalk the streets and corpses fill the churches 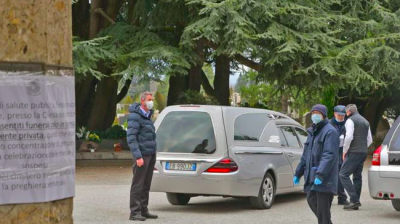 BERGAMO – Northern cities in Italy are reaching a point of no return for their health services, as each day in Bergamo 85 people are admitted to intensive care compared to two or three that leave. In Lombardy alone, there are 11685 coronavirus cases, with 4896 hospitalised and 732 in intensive care, according to regional health officials.

Ambulances can be heard constantly in Bergamo as they take patients to the hospital. In the city of Alzano there is no longer enough coffin space for the deceased, and churches are being used to store corpses, reports Il Fatto Quotidiano. Alzano has 14 thousand inhabitants, and is the worst affected area in Italy with over half of the population infected. Many of those who have died, did so alone in the hospital, separated from their families by necessity. Funeral vigils have mostly been suspended, and mayors have to make the choice as to whether they close cemeteries and where to bury the deceased when they do, reports Il Giorno Brescia.

The strain on the health services has been exacerbated by a lack of protective supplies. The regions of Lombardy, Brescia, Puglia, and Liguria, are missing masks, gloves and swab tests, and many of the masks that have been supplied are not suitable. The Lombardy councilor for Welfare, Giulio Gallera, criticised the Civil Protection authorities for sending 250 thousand masks to the Lombard medical staff which were not to medical standards, comparing the masks to “handkercheifs” and “toilet paper,” as quoted in Il Fatto Quotidiano.

As hospitals were stretched to breaking point over the weakened, two coronavirus positive patients in serious condition were transferred by military plane overnight from Bergamo to Palermo in order to receive treatment, La Stampa reports.

While Italians get used to life in isolation, Italy has also had to adapt to the pandemic in ways large as well as small. In Bergamo, the church of Ognissanti in Bergamo has been turned into a gigantic morgue over the last three days. In Milan, a crowdfunding effort from over 191 thousand donners raised over 3.8 million euros to convert the former sports field of the Vita-Salute San Raffaele University into new intensive care facilities for the San Raffaele Hospital, report La Repubblica.