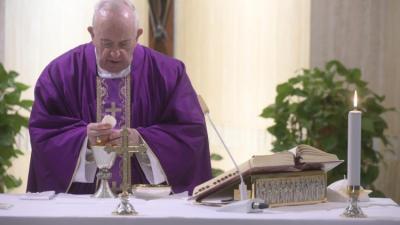 VATICAN CITY – Pope Francis thanked priests in Lombardy Sunday for remaining close to their parishioners at the epicentre of the Coronavirus epidemic and reiterated his "closeness to all the sick and those who are curing them.”

“In these days St Peter’s Square is closed, therefore my greeting is addressed to you who are linked to me via means of communication,” the pontiff said in his weekly address held for the second Sunday in a row from the pontifical library and beamed by streaming to the faithful. “In this epidemic situation in which we find ourselves living more or less in isolation, we are invited to rediscover and deepen the value of the communion that unites all the members of the Church,” Francis said.

“United with Christ we are never alone, but form a unique Body, of which He is the head. It is a union fed by prayer, and also with the spiritual communion to the Eucharist, a practice that is recommended when it is not possible to receive the Sacrament. I say this for everyone, especially for people who live alone.”

“I renew my closeness to all the sick and those who cure them as well as to the many workers and volunteers who help people who cannot leave home and those who help out the most poor and the homeless,” the pope said.

Francis noted that the Archbishop of Milan Sunday was celebrating Mass in the city’s polyclinic hospital. “The archbishop is close to his people and to God.” He recalled that the archbishop had climbed on the roof the city’s Duomo to say a special prayer to the Maddona for the deliverance of the city from the epidemic.

“I want to thank all the priests in Lombardy for the creativity with which in a thousand different ways they have remained close to their people. Thank you so much to you priests.”

"This is no time to be a don Abbondio," Francis said in a reference to the cowardly priest in i Promessi Sposi.

Earlier Sunday in the homily of the Mass he celebrated in the Santa Marta chapel in the Vatican, the pontiff praised those continuing to provide essential services.

Meanwhile in Rome a number of parish churches were open for prayers Saturday evening and Sunday after the pope on Friday said that dratic measures sometimes could be excessive and called for parish churches to be re-opened at the discretion of priests.

In the Basilica of Santa Maria in Trastevere, one of the oldest churches in the Eternal City, Saturday evening priests wearing masks imparted blessings to parishioners.