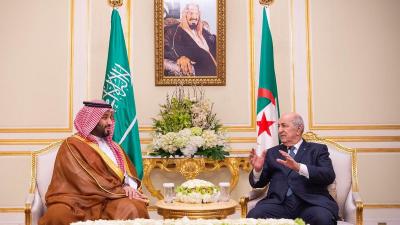 ALGIERS - For the past several years, Algeria has lacked any real presence in the realm of international diplomacy. This is for a large part the result of ousted former president Abdelaziz Bouteflika’s monopolisation of the country’s foreign policy. Now, however, Algiers appears determined to restore its formerly active role on the world stage.

With its new president, Abdelmadjid Tebboune, Algeria is trying to emerge as a fundamental broker of stability in the Maghreb, where polarisation, insecurity, and foreign interference have become commonplace.

While Mr Tebboune emphasised a desire to maintain a position of neutrality in foreign policy during his inauguration ceremony in Dec. 2019, he also warned that, “Algeria is the first country to be impacted by instability in Libya and we will never allow ourselves to be excluded from the Libyan peace process.”

Off the back of these words, Algiers has increasingly involved itself in efforts to facilitate a political settlement in Libya’s multidimensional conflict, which is posing a serious threat not only to regional stability but also to Algeria’s 1,000-kilometre Libyan border.

Faced with a range of political and economic issues as well as the mayhem produced by a domestic protest movement that has crowded Algerian streets for more than a year, authorities in the country are genuinely concerned with any potential spill-over from developments in Libya.

Last month, Algiers hosted a summit of Libya’s neighbours in which attendees jointly rejected “any foreign meddling” and called for a negotiated settlement. Other recent visitors to the Algerian capital include Fayez Al Sarraj, the prime minister of Libya’s Government of National Accord, and Mevlut Cavusoglu, Turkey’s foreign minister. The overall picture is an attempt by Mr. Tebboune – however incremental – to build a role for Algeria in the Libyan conflict’s resolution.

Algeria initially opposed the overthrow by NATO forces of Muammar Qaddafi, the former Libyan dictator, in 2011. The chaos that followed that event had major ramifications for Algeria’s own security.

By May 2014, the chaos had become a full-blown civil war, seeing Libya torn between two centres of power – the Tripoli-based GNA, recognised by the UN and supported by Turkey and Qatar, and Field Marshal Khalifa Haftar’s Libyan National Army based in Benghazi supporting the elected House of Representatives.

The fractures in Libya have polarised much of the wider region, from the Sahel to Europe, and Algeria has not been immune to the impacts of this. The country is finding itself having to negotiate its footing across the varied and sometimes shifting positions of countries like France, Italy, Egypt, Mali, Morocco, and Niger.

Algerian authorities are also extremely concerned about the potential infiltration from Libya of ISIS fighters, and the possibility for Libya to become a permanent sanctuary for Al Qaeda in the Islamic Maghreb. Algeria views the latter’s presence in Libya as a major threat. The Jan. 2013 militant attack on a natural gas complex in the Algerian town of In Amenas and the hostage crisis which ensued, is a painful reminder of Algeria’s vulnerability to Libyan-bred militant extremism.

In these conditions, Algiers has spent more than $500 million on securing its Libyan border. This figure will only increase with the escalation of the conflict.

Although, in the words of Ghassan Salame, the UN secretary general’s former special representative, “actors inside and outside of Libya cynically nod and wink towards efforts to promote peace” while continuing to “double down on a military solution,” Algeria has ties to various rival actors which render any embrace of a purely military solution difficult for Algiers.

In the wake of the Turkish foreign affairs minister’s visit and his attempts to garner Algerian support for Ankara's military intervention on the side of the GNA, in Jan. 2020 Mr. Tebboune called any escalations in the city of Tripoli “a red line.”

“Algeria,” he insisted, “is against any form of foreign interference and wants to find a peaceful solution to the current crisis in Libya.”

It is indeed clear that Algeria’s new administration considers negotiated settlements – not “boots on the ground” – to be the way forward.

This is the claim that Mr. Tebboune underlined in his speech during an international conference on Libya in Berlin, Germany, on Jan. 19.

Libya’s internal difficulties risk compounding existing political, economic and security issues in Algeria, and if unchecked this might threaten the latter’s stability for years to come. And given the recent twists and turns of Algerian politics, in which a president has been overthrown and a new one is attempting to find his way, Algeria’s policymaking apparatus knows that it must tread carefully in its forays into regional diplomacy.

Mr. Tebboune wants to shed the strait jacket that his predecessor imposed over Algerian diplomacy, and turn his country into an active, respected player in regional and global politics. He knows, however, that Algeria cannot go too far without first testing itself with the war on its own doorstep.