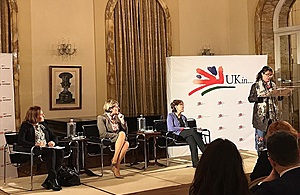 ROME – The British ambassador to Italy, Her Excellency Jill Morris, has spoken out about antisemitism on an all-woman panel set up to explore the sociological and cultural factors that cause intolerance and discrimination. Also speaking at the event was the President of Jewish Community in Rome, Ruth Dureghello, and the Italian National coordinator for the Fight against Antisemitism, Milena Santerini.

Ambassador Morris said in her opening remarks that, “the British government and the Embassy in Rome remain at the frontline in the fight against all forms of discrimination based on ethnicity, the colour of one’s skin, religion, or sexual orientation.”

The event, organised by ambassador Morris and held at the Villa Wolkonsky on Feb. 28, was designed to promote a message of integration, arrive at a better understand of the phenomenon, and develop the tools to fight antisemitism, in light of the flare-up over the past months that has targeted the Jewish community in Italy.

In Nov. 2019, the Senator for life and Holocaust survivor, Liliana Segre, was given police protection after receiving a deluge of hate messages. Although not in attendance at the event, Senator Segre contributed to the discussion by way of a message read by her spokesperson, Maria Paola Gargiulo.