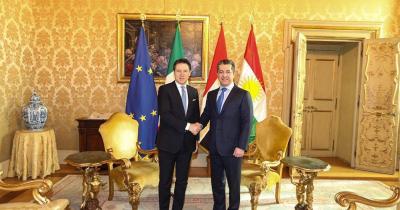 ROME - The Prime Minister of the Kurdistan Regional Government H.E. Masrour Barzani, accompanied by a delegation of the four other government ministers, met in discussion with the Italian Prime Minister Giuseppe Conte at his official residence the Palazzo Chigi.

The Prime Minister Masrour Barzani thanked President Giuseppe Conte for the role Italy played in the fight against ISIS and underlined the fundamental importance of the Italian Carabinieri in training the Peshmerga and the Kurdistan region's armed forces.

The Kurdistan delegation conveyed their ambitious reform program during the discussion, which aims to make numerous internal changes as well as increasing foreign investment, such as by attracting Italian investors who might inspire the Kurdish region to develop an entrepreneurial atmosphere.

The Prime Ministers’ talk focused on the difficult situation in Iraq and the areas surrounding the Kurdistan region, which are of vital importance to international cooperation.

His Excellency Barzani stressed with regret that ISIS was still a threat in the region, and President Conte reiterated Italy's commitment to support the Kurdish struggle for freedom, tolerance, and international peace.