Serie A spars with club owners over cancelled fixtures 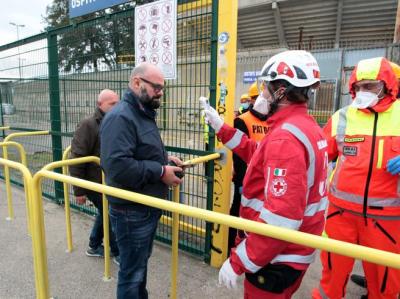 ROME – Serie A went into organisational meltdown on Sunday, with five football matches postponed a mere five hours from kick-off, after sporting events in the northern Italy were cancelled for another week due to the coronavirus outbreak following a new decree from the Italian government.

One of the matches postponed was Juventus and Inter Milan, which sparked a row between Paolo Dal Pino, the President of Serie A, and Inter Milan’s CEO Guiseppe Marotta. During a telephone interview, Dal Pino attacked Marotta for not agreeing to rearrange the crucial Seria A title-race match for Monday. “Inter has categorically refused. Marotta represents Inter's needs. I protect Serie A”, Dal Pino said, as quoted in Corriere Della Sera.

In response, Marotta has said that “the proposal to postpone until Monday was imprudent and provocative. Those attending would have been only Juventus’, and playing with open doors would have been contrary to the logic of public health. It assumes the disappearance of the coronavirus in 24 hours – from closed doors on Sunday to open doors on Monday,” as quoted in Correire Della Sera.

The other games postponed over the weekend included Udinese and Fiorentina , AC Milan and Genoa, Parma and Spal, and Sassuolo and Brescia, although these have been provisionally rearranged for May 13, according to Giornalettisimo.

The last-minute cancellation of the matches has also sparked complaints from the owners of these clubs, with Florentina asking Serie A for reimbursement for their trip to Udine, and the President of Brescia, Massimo Cellino, sending a letter which asks Serie A for compensation, according to Corriere Della Sera.

Before the Italian government’s new decree, the games were due to take place without fans in attendence, but this decree will extend the match ban for the third time, while also forbidding fans residing in Lombardy, Veneto and Emilia Romagna from attending sporting events in the rest of Italy.

There are four matches next weekend that are set to be postponed - Atalanta and Lazio, Bologna and Juventus, Inter Milan and Sassuolo, and Helas Verona and Napoli.

Serie A has scheduled an emergency assembly for Wednesday in order to arrive at an agreeable solution, according to Corriere Della Sera. Options are thought to include moving back the fixtures again, or substituting Italian Cup matches for Serie A matches, but there will be no way to satisfy all teams and avoid irregularities. Some Serie A teams have already missed two games, and while some teams might welcome the chance to rest, others will not want to lose momentum.

The president of the Italian National Olympic Committee, Giovanni Malagò, spoke about the dispute on a radio programme, and said, “so many hypotheses have come into play. Maybe some mistakes have been made, but the biggest mistake is that you don't make a definitive decision on Wednesday," as quoted in La Repubblica.

"Yeserday an opinion came out that I would like to advocate for, the only thing to do is to postpone the whole championship so that there is no doubt about the regularity," he said.