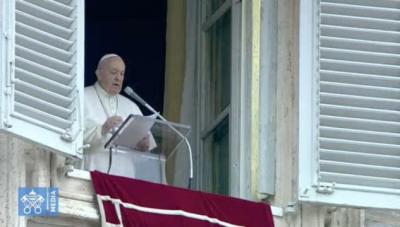 VATICAN CITY – Pope Francis Sunday in his weekly Angelus address told the faithful that he is still ill with a cold and will not take part in scheduled spiritual exercises for Lent being held for the Roman Curia outside of the Eternal City.

“I still have a cold and it is preferable to follow from here the spiritual exercises in Ariccia,” the 83-year-old pontiff said from the window of the papal apartments overlooking St Peter’s Square. “I will join the Roman Curia in prayer from the Casa Santa Marta,” he told a smaller than usual crowd of pilgrims and tourists in the vast square under cloudy skies.

The pope coughed twice during his noontime address. Francis carried out a reduced schedule of audiences Saturday after cancelling engagements Thursday and Friday due to what the Vatican termed a “slight indisposition.”

The pontiff made his remarks as the number of people infected with coronavirus in Italy reached over 1,000 of whom 29 have died and 50 have been cured, health ministry officials.

Italian police monitoring people arriving in St Peter's Square Sunday used a new system of filtering the crowd so that people have less direct contact with each other instead of the usual throng jostling to get past police controls of bags.