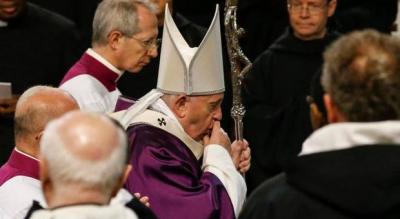 VATICAN CITY – Pope Francis resumed a streamlined version of his normal gruelling working schedule Saturday, holding several private audiences, but remaining in the Santa Marta guest house, the Vatican said, amid speculation about his state of health after he had cancelled engagements for two days with a 'slight indisposition.'

"This morning the Holy Father, after celebrating Mass, proceeded at the Santa Marta guest house with the meetings on his agenda, with the exclusion of audiences for the international bio-ethic group and the participants at the General Chapter meeting of the Legionaries of Christ ..." the Holy See said in a statement.

Coronavirus reached the outskirts of the Eternal City after a woman in the port city of Fiumicino was diagnosed as positive with the illness but the number of people who were cured of the virus also continues to increase, health officials said.

The woman at Fiumicino had recently returned from a trip of several days to the northern town of Bergamo in Lombardy. The only other cases treated in Lazio were a Chinese couple from Wuhan treated at the Spallanzani hospital in Rome where they were cured and a researcher who returned from Wuhan.

In all 821 people were reported to have been infected in Italy by Friday of whom 380 confirmed positive by the Higher Health Institute, special commissar Angelo Borrelli said Friday night.

Of the 821 as many as 345 are in hospital while 67 are in intensive care. The death toll climbed to 21 though Borrelli said the four latest deaths were all of elderly people who already were suffering from other ailments.

The number of people who have been cured of the illness rose to 46 of whom 40 in Lombardy. Lombardy remained worst hit region with 532 cases including 17 dead followed by the Veneto with 151 cases, Emilia Romagna with 145 and Liguria with 19 while Sicily had four and Umbria two cases.